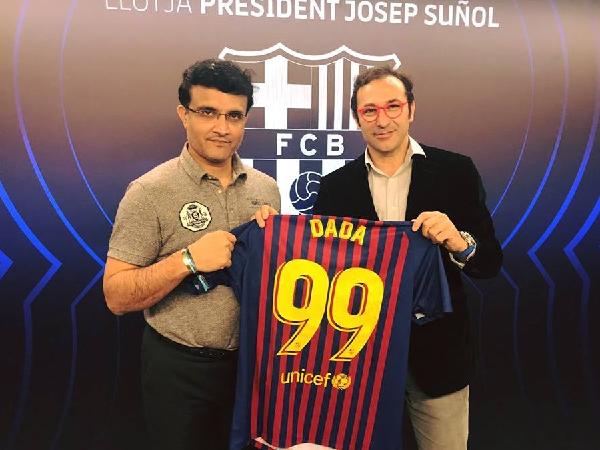 Welcome to another installment of our Indian football news roundup. In this section, you will find all the news pertaining to Indian football that happened today. Today, we will talk about Barcelona officials handing Sourav Ganguly a replica jersey and, Mohun Bagan’s first home win in the I-League.

Barcelona officials hand out a replica jersey to Sourav Ganguly

Former Indian cricket team captain Sourav Ganguly took time out of his busy schedule to spend some quality time with his family in Spain. The Indian cricket legend stopped by the city of Barcelona to watch his favorite footballer Lionel Messi’s side Barcelona trash Celta Vigo 2-0 at the Camp Nou stadium.

The official Facebook page of La Liga acknowledged the same and the club’s board member presented Sourav Ganguly with a replica jersey with ‘Dada’ embellished in it.

Mohun Bagan registered their first home victory in the 2018-19 season of I-League when they beat a young and energetic Shillong Lajong side 2-0 at the Salt Lake stadium on Sunday.

Yuta Kinowaki drew first blood for the Mariners by guiding Abhishek Ambekar’s cross from the left wing in the 47th minute. Mohun Bagan doubled their lead in the 61st minute after a comedy of errors by the Shillong-based side gave the goalscorer Henry Kisekka a shot at an empty goal.

I-League: NEROCA and Minerva Punjab share the spoils in a goalless draw

In the previous I-League match of the day, NEROCA and Minerva shared the spoils in a 0-0 draw at the Khuman Lampak Main Stadium in Imphal. Felix Chidi could have given the home side the lead in the 77th minute when he stepped up to take a penalty.

However, his ensuing shot blazed over the bar and, the scoreline remained unchanged. This win takes NEROCA to the fourth position in the points table with 15 points from nine matches. Defending champions Minerva Punjab, on the other hand, remains on the seventh position with 13 points from ten matches.

According to Goal.com, not all the members of the Indian football team have received their new jersey. Six5Six was roped in as the new sponsor for the Blue Tigers after the previous deal with Nike expired.

The Indian team unveiled the new jersey in a glitzy function at New Delhi with the likes of Sunil Chhetri, Sandesh Jhingan, and Gurpreet Singh Sandhu walking down the ramp. The Indian football team is currently in the UAE preparing for the 2019 AFC Asian Cup.

Quess East Bengal ‘B’ team clinched the Darjeeling Gold Cup 2018 after beating Mohammedan Sports Club in the finals. The game ended in a 0-0 stalemate after 120 minutes of action-packed football.

The Red and Gold Brigade won the penalty shootouts by a margin of 3-1.

I-League: Hotstar might not do a live stream all the I-League matches