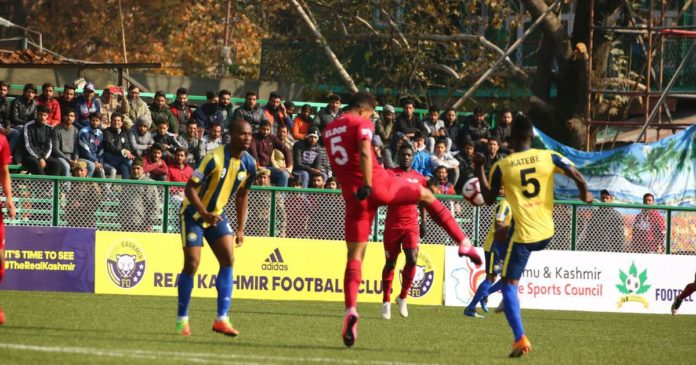 Real Kashmir FC failed to break 10-man Churchill Brothers in the Hero I-League as the game ended in a 0-0 stalemate. Meanwhile, Chennaiyin FC got their first victory of ISL 2018-19 as they overcame FC Pune City 4-2 from behind.

Danish Farooq got the first chance of the game for the home side when Brian Mascarenhas’ cross from the left flank found him. He did well enough to beat the keeper but got denied by the crossbar. Real Kashmir could have taken the lead at the dying minutes of the first half when rival keeper James Kithan handled the ball outside the box in an attempt to deny Gnohere Krizo through on goal. The referee had no hesitation in flashing out the red card and he was sent off.

Real Kashmir tried to take the extra man advantage by pushing men forward. However, the away side held their ground firm and the game finished 0-0 at Srinagar.

Unlike the tepid game of the morning, the ISL match between Chennaiyin FC and FC Pune City was a frantic and eventful one. Ashique Kuruniyan drew first blood for the visitors at the 9th minute when he slotted the ball home after receiving an inch-perfect cross from Robin Singh. Chennaiyin equalized and took the lead near the hour mark when Mailson Alves headed in Anirudh Thapa’s free-kick and Gregory Nelson got past Lalchhuanmawia Fanai and beat Karanjit in a one-on-one position.

Anirudh Thapa’s set pieces continued to spell trouble for the home side as they failed to clear his corner and Inigo Calderon pounced on it with an acrobatic effort to pile up the misery. Thoi Singh, too, got his name in the scoresheet when he put the ball past Karanjit after he parried away Jeje’s initial shot. Jonathan Vila did find the back of the net for the visitors from a Marcelinho corner, but it proved to be too little too late. The Stallions’ troubled didn’t end there as Marcelinho was rightly shown the red card after taking out Germanpreet Singh in a career-ending sliding challenge.

With this 4-2 win, Chennaiyin FC climb to the seventh position with 4 points from 7 games whereas FC Pune City slide to the bottom of the table, after remaining winless in six games.