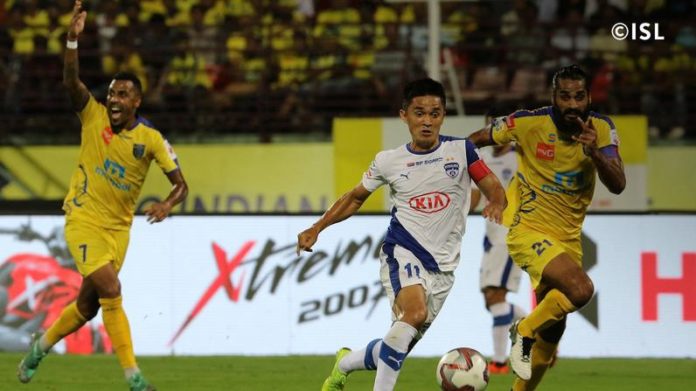 Indian Arrows picked up their first victory of the Hero I-League as they overcame Shillong Lajong 1-0 at the Barabati stadium in Cuttack. Meanwhile, Bengaluru FC galloped to the top of the table from the fourth position by getting the upper hand over Kerala Blasters 2-1 at the latter’s home ground.

Indian Arrows couldn’t have asked for a better start to the game as they took the lead at the 11th minute when Ashish Rai curled the ball in following a failed clearance from Novin Gurung. Shillong Lajong tried to attack from the center of the park and the Blue Colts exploited the wings.

However, neither of them could find the back of the net as the full-time scoreline remained 1-0 in the favor of the home side. With this win, Indian Arrows surge to the fourth position, collecting three points from two games. Meanwhile, Shillong Lajong stumble to the fifth position with three points from as many games.

In the other game of the night, Kerala Blasters displayed scintillating football but luck paved the way for Bengaluru FC. The Yellow Brigade were on the front foot in the initial minutes of the game, but it was the visitors who broke the deadlock. Miku released Sunil Chhetri on the left wing, which was clearly offside. However, the flag stayed down and a brilliant finish from the Captain put them on the driver’s seat.

The joy was short lived as Kerala Blasters found the equalizer at the 30th minute when Samad got tripped by Nishu Kumar in the box. Stojanovic stepped up to take the penalty and blasted it in the back of the net.

Chhetri could have doubled the lead when Dimas Delgado’s long ball pierced the defense. However, he put the ball out of play by virtue of his heavy touch. But, they did get their lead back at the 80th minute when Krcamerevic unintentionally put the ball past Navin Kumar after he parried away Xisco’s shot. The final scoreline remained 2-1 in the favor of Bengaluru FC who march on to the top of the table.

Tomorrow’s game would see Real Kashmir taking on Churchill Brothers and Aizawl FC locking horns with NEROCA in the I-League whereas FC Pune City would battle it out with Chennaiyin FC at the ISL.