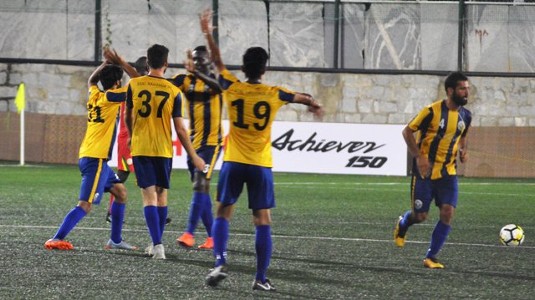 Real Kashmir FC again proved why I-League is one of the most unpredictable leagues of the world by trouncing defending champions Minerva Punjab 1-0 in their debut. In the other game of the I-League, NEROCA and Gokulam Kerala played out an entertaining 1-1 draw. Later in the evening, Bengaluru FC rode on Miku and Erik Paartalu’s goals to edge out a victory over ATK in the latter’s home ground.

Minerva Punjab started the game on a positive note with their striker William Opoku looking dangerous up front. However, the Hero of the Match Bilal Khan held his ground firm and ensured the scoreline remained the same at halftime. Bilal continued his string of saves as the game resumed when he produced two back-to-back saves in the opening minutes of second half.

Real Kashmir’s determination finally paid off when their striker Gnohero Krizo broke the deadlock at the 73rd minute from a set piece variation. The final scoreline remained 1-0 as Minerva Punjab looked distraught in tasting defeat at their home soil.

In another I-League game taking place simultaneously, Baoringdao Bodo gave Gokulam Kerala the lead just before the halftime whistle after a fierce counter-attack. NEROCA bounced back into the game when Eduardo Ferreira restored parity for them after a set piece variation at the 59th minute.

Gokulam pushed men forward in search of three vital away points, but Bodo and Antonio German’s miscued chances didn’t prove to be of any help.

In the only fixture of the ISL, Bengaluru came from behind to halt ATK’s momentum. U-17 World Cupper Komal Thatal gave the home side the lead at the 15th minute after a brilliant defence-splitting pass from Everton Santos. Arindam Bhattacharya produced a point-blank save off Miku’s header at the 21st minute as the Blues looked forward to leveling things up.

Bengaluru’s attacks finally paid off dividends late in the first half when Miku slotted the ball past Arindam from a free kick. As the game resumed, Bengaluru continued their momentum and took the lead at the 47th minute after Erik Paartalu punished ATK for their scuffed clearance in a free kick.

ATK pushed men forward for the equalizer, but Gerson Viera’s shot rattling the woodwork was the closest they could come. The full-time score read 2-1 in the favor of the visitors as they climbed to the third spot behind Northeast United FC and FC Goa.