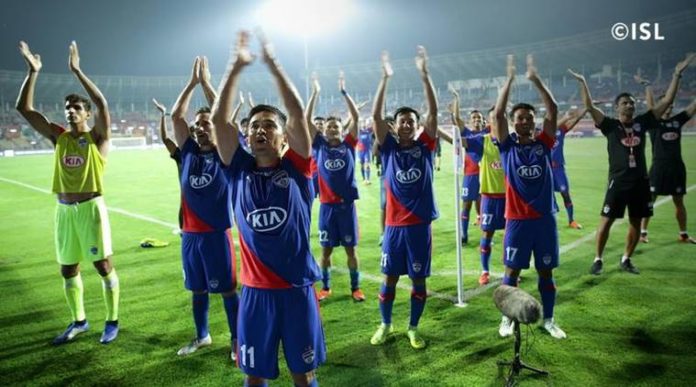 Bengaluru FC surged to the top of the Hero Indian Super League table with a 2-1 win over FC Pune City at the Sree Kanteerava Stadium in Bengaluru. FC Pune City, on the other hand, remain on the ninth position with five points from nine games.

The visitors started the game on an attacking note with crosses flying in from the wings. However, it was Bengaluru FC who drew first blood at the 11th minute after Udanta Singh cut through the right side and curled the ball over the goalkeeper. The joy remained short-lived as Rahul Bheke scored an own goal four minutes later after failing to clear Stankovic’s low cross.

Bengaluru FC tried their best to take back the lead at the first half, but a spirited performance from Kamaljit Singh ensured the scoreline remained the same. In the second half, the visitors read the movements of Bengaluru’s attacks and nullified them at the final third. However, the resilience was broken at the 88th-minute after the villain Rahul Bheke became the hero by breaking the deadlock.

Earlier, in the I-League, Churchill Brothers and Gokulam Kerala FC played out an enthralling 1-1 draw at the EMS Stadium in Kozhikode. Willis Plaza gave the visitors the lead at the 5th minute after a defense-splitting through ball from Lamgoulen Hangshing.

Arjun Jayaraj restored the parity at the 36th minute after being fed a brilliant through ball from the Ghanian Christian Sabah. Churchill Brothers find themselves in the second position with 10 points from 6 games whereas Gokulam find themselves in the third position with 9 points from 6 games. They are both, respectively, six and seven points behind the league-leaders Chennai City FC, having played the same number of matches.