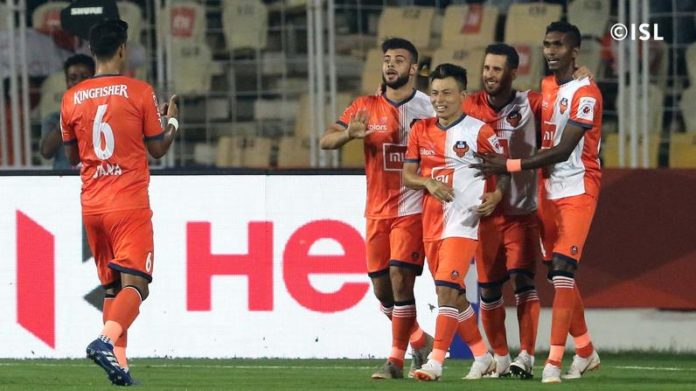 FC Goa continued their stupendous form in the Hero Indian Super League by hammering FC Pune City 4-2 at the Fatorda Stadium in Goa. Meanwhile, an all-Indian Shillong Lajong triumphed 2-1 over Aizawl FC, and Minerva Punjab and Churchill Brothers shared spoils in a goalless draw earlier in the I-League.

In the most eventful game of the night, FC Goa triumphed over FC Pune City in a six-goal thriller. The home side broke the deadlock at the 5th minute when Coro shrugged off Gurtej’s challenge to put the ball past Vishal Kaith. Marcelinho leveled the terms three minutes later when his curler from outside the box dipped past Mohammad Nawaz.

But, the joy was short-lived as Hugo Boumas headed in Coro’s chipped pass and Jackichand slotted the ball past a hapless Vishal Kaith to give the Gaurs a two-goal cushion. Alfaro did reduce the deficit for FC Pune City when he smashed the ball past Nawaz from the right side of the pitch. However, Coro reinstated the margin by pouncing on a loose ball after the Pune defense failed to clear Jackichand’s cross.

When the two teams came out of the tunnel, the visitors were greeted with a penalty as Chinglensana Singh brought down Alfaro inside the penalty box, although the replays showed otherwise. But, Mohammad Nawaz dived the right way to deny FC Pune City a comeback. Both the teams finished off with ten men as referee Pranjal Banerjee showed red cards to Diego Carlos and Coro for needless horrendous tackles in the dying minutes of the game.

Naorem Mahesh drew first blood for Lajong at the 20th minute when his world-class right-footed curler from the edge of the box turned the goalkeeper into a mere spectator. The Men in Red continued pushing forward and extended their lead when Mahesh tapped in Novin Gurung’s inch-perfect cross.

Kromah did pull one back for the visitors at the 71st minute from the spot, but it turned out to only be a consolation. The full-time scoreline read 2-1 in the favor of Shillong Lajong who made it clear that they are a side others should be wary about.

Earlier in the day, defending champions Minerva Punjab and Churchill Brothers played a 0-0 draw at the Tau Devi Lal stadium in Panchkula. Unlike the frenetic pace of the later two matches, it was a tepid one with both sides playing safety first. However, Churchill Brothers could have walked away with three points at the dying embers of the game, but Minerva goalkeeper Bhaskar Roy was alert to see-off Uttam Rai’s one-on-one challenge.