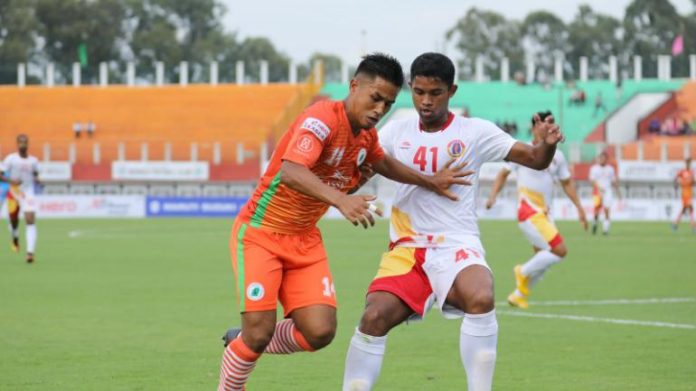 Enrique Esqueda announced his arrival in Indian football in style as his two goals made all the difference for Quess East Bengal. The Mexican got his name in the scoresheet at the 9th minute after he connected Lalrindika Ralte’s lofted pass and sailed it past the hapless keeper. NEROCA pressed hard for the equalizer for the remainder of the first half, but the East Bengal defense held their ground firm.

After the two sides came from the tunnel, the 30-year-old stepped up to take the penalty after Laldanmawia Ralte was brought down in the box. NEROCA goalkeeper Mauro Boerchio dived full stretch, but couldn’t stop the shot from going in the back of the net. The scoreline remained 2-0 as East Bengal began their I-League campaign with a bang.

In the second I-League game of the day, Mohun Bagan and Gokulam Kerala FC shared the spoils in front of a packed drum-beating crowd in Kozhikode. The Green and Maroons blazed all their guns from the word go and could have taken the lead in numerous occasions. However, they had to wait till the 40th minute to draw first blood after Henry Kisekka headed in an inch-perfect free-kick from Arijit Bagui.

In the second half, Gokulam flooded the opponent half, and Mohun Bagan’s Lalchhawnkima succumbed to the pressure after his scuffed shot found the back of his own net. Gokulam came agonizingly case to walk away with three points after the introduction of S Rajesh, but Shankar Roy’s heroics ensured the final scoreline read 1-1.

In the only ISL game, Mumbai City FC managed to forget their horrendous 5-0 drubbing through the hands of FC Goa and defeated Delhi Dynamos 2-0 comfortably. Moudou Sougou broke the deadlock at the 30th minute when he glided past Marti Crespi to score following a wonderful pass from Arnold Issoko.

The Congolese international was again in the thick of actions when he was brought down by Rana Gharami inside the penalty box at the 49th minute, although the replays showed otherwise. Despite sending the keeper the wrong way, Rafael Bastos failed to convert the penalty as his shot went wide. However, the Brazilian made amends for it at the 70th minute as his defense-splitting pass sent Arnold one-on-one with the keeper whom he comfortably beat and slotted it past an empty net.