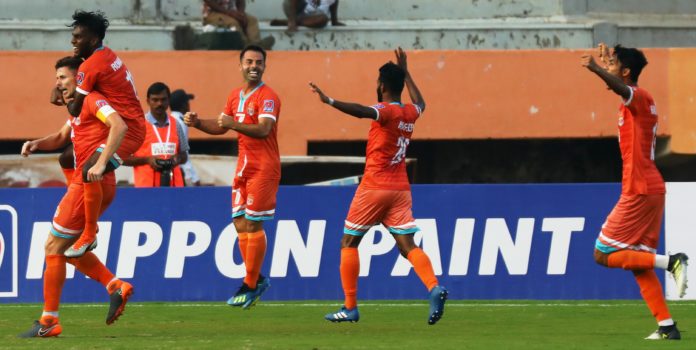 East Bengal lost 2-3 to Aizawl FC in the first encounter of the 2018-19 Hero I-League at the Rajiv Gandhi Stadium in Aizawl. The game was marred in controversy as the ball had crossed the line at the 40th-minute courtesy of a Lalramchullova free-kick, but the referee didn’t have clear sight of the ball and the goal was not given.

Leonce Dodoz drew first blood for the home side at the 25th minute and the scoreline remained the same for the next 37 minutes. Jobby Justin pulled one back for East Bengal and Borja Perez gave the lead eight minutes later. However, the joy was short lived as Zoherliana and substitute Lalkhawpuimawia’s goals in a span of ten minutes turned the tides again.

The final scoreline remained 3-2 as Aizawl FC tasted their first victory in the Hero I-League 2018-19.

The second I-League game of the day between Chennai City FC and NEROCA too had a frantic pace with both sides pressing high and playing a fluid game of football. Chennai City FC broke the deadlock at the 14th minute after Roberto Eslava gave the home side the lead.

Nestor Gordillo doubled the lead at the 52nd minute and Subash Singh pulled one back for the consolation. With this 2-1 win, Chennai City FC now have 16 points from 6 matches.

Unlike the frantic I-League games, the ISL encounter between Mumbai City FC and ATK was a tepid one with hardly any half chances created throughout the game. The game ended in a 0-0 draw.