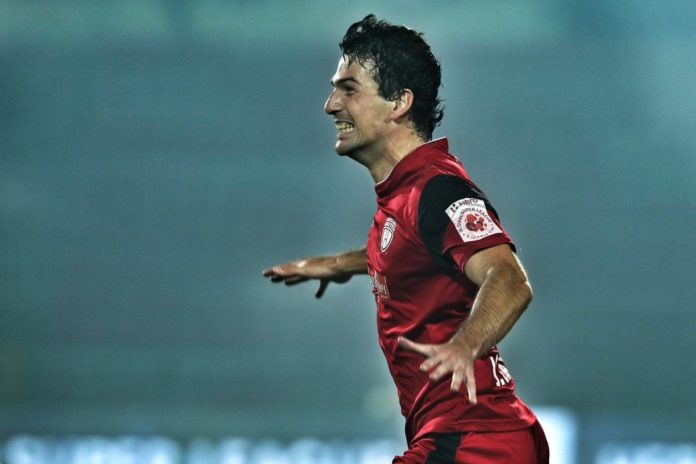 Northeast United FC scored two late goals in the extra time to defeat Kerala Blasters 2-1 at the Indira Gandhi Athletic Stadium in Guwahati. This win takes them to the third position with 14 points, two points behind league-leaders FC Goa and second-placed Bengaluru FC.

Northeast United FC could have broken the deadlock multiple times in the first half, but Bartholomew Ogbeche’s poor finishing and Dheeraj Singh’s heroics ensured otherwise. The duo of Seimenlen Doungel and Halicharan Narzary created havoc for the home team defenders. However, other than hitting the woodwork at the 37th minute, they couldn’t create any meaningful chance.

Earlier in the I-League today, Minerva Punjab and Shillong Lajong shared the spoils in a game marred with controversy. The defending champions were reduced to ten men after the manager made a substitution which resulted in them having six foreigners on the pitch. The match commissioner noticed it and prompted the Minerva team to take out one of the substitutes.

Phirangki Buam drew first blood for the home side after intercepting Deepak Devrani’s back pass and rocketing it past the keeper. Allen Lyngdoh doubled the lead at the 43rd minute after tapping the ball in an empty net following a cross from Samuel Lyngdoh in the counter.

The away side got a goal back just before the half-time whistle as William Opoku slotted it in the back of the net. Despite being a man down, Minerva came blazing all the guns and equalized at the 75th minute through Philip Njoku’s strike. The scoreline remained the same as Minerva and Shillong Lajong played out an entertaining 2-2 draw.