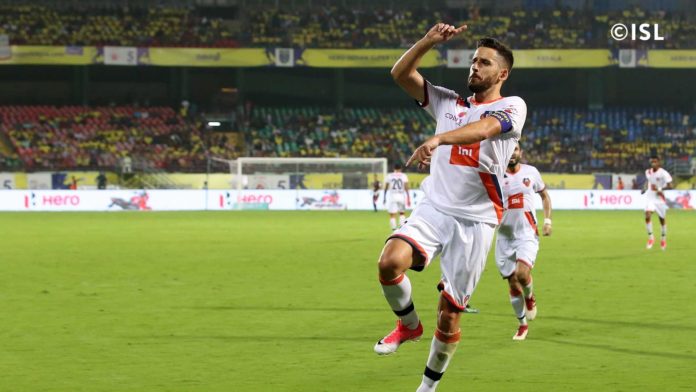 FC Goa cemented their place in the top of the table with a 3-1 victory over Kerala Blasters at the Jawaharlal Nehru stadium in Kochi at the Hero Indian Super League. In the Hero I-League, NEROCA and Gokulam got their first victory by triumphing over Real Kashmir and Shillong Lajong respectively.

Coro gave the visitors the lead at the 11th minute after heading in Ahmed Jahouh’s cross from the right flank. The Spaniard scored his eighth goal of the season after hammering it from the edge of the box at the dying embers of the first half.

Kerala came out of the tunnel with more intent and vigor in search of a goal, but FC Goa tripled the lead at the 67th minute after substitute Manvir Singh headed the ball from a corner kick. Kerala Blasters did pull one back at the 91st minute through Nikola Krcmarevic, but it proved to be too little too late.

In the I-League, NEROCA rode on Felix Chidi’s brace to defeat Real Kashmir at the picturesque TRC Ground in Srinagar. The visitors broke the deadlock at the 28th minute after Chidi connected Ashok Singh’s cross and put it past Bilal Khan. The Nigerian doubled the lead at the 74th minute by latching onto a defensive lapse by the Kashmiri side.