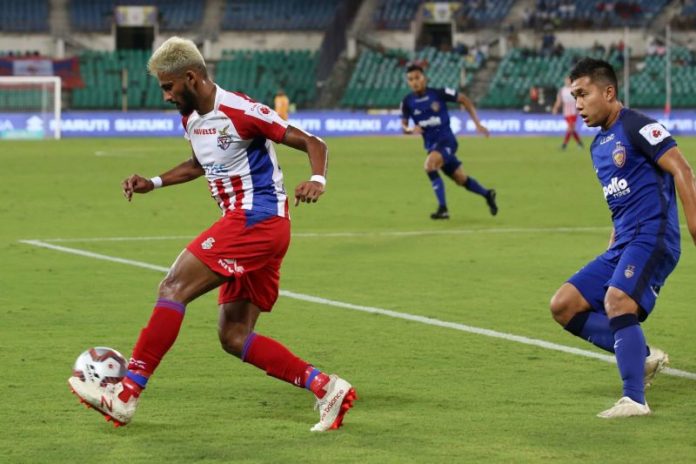 Jayesh Rane broke the deadlock for the visitors through a thunderous screamer at the 10th minute which left the rival goalkeeper Sanjiban Ghosh flabbergasted. Thoi Singh did pull one back for his side at the 24th minute, but ATK regained the lead at the stroke of half-time after Manuel Lanzarote converted from the spot.

The Spaniard further increased the lead at the 80th minute through another penalty. Isaac Vanmalsawam did reduce the deficit at the 88th minute, but it turned out to be a mere consolation as the full-time score read 3-2.

In the earlier game of the day in the I-League, NEROCA outwitted Shillong Lajong 2-1 at the Jawaharlal Nehru stadium in Shillong. Felix Chidi drew first blood for the visitors after connecting a brilliant cross from Malemnganba Meetei at the 33rd minute.

Phirangki Buam leveled things up for Shillong Lajong after being fed a brilliant through ball from Naorem Mahesh Singh as the game resumed from half-time. NEROCA pressed hard for the winner and were finally granted one at the 88th minute after Subhash Singh connected Felix Chidi’s cross.

The final scoreline read 2-1 in the favor of the visitors who walked away with all the three points. This win takes NEROCA to the fifth position with eight points from six games.