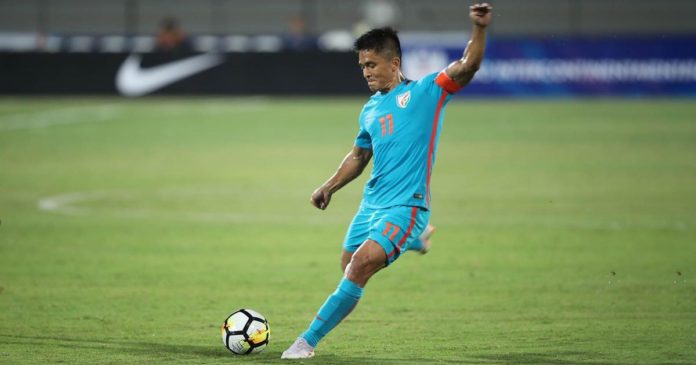 In case you missed out yesterday’s edition, you can check it out here.

Indian football team captain Sunil Chhetri recently took part in an interview with FIFA.com where he detailed how his team felt after failing to qualify for the 2015 AFC Asian Cup. Here is the excerpt via Indiatoday.

I was really dejected when we missed out on the last edition. I think it’s very, very important for a country like us to keep qualifying for this big tournament because that tells you where you are and if you’re doing well. It also gives you a chance to rub shoulders with the biggest teams in Asia. If you do well, other teams take notice of you,” said Sunil Chhetri.

In the only Indian Super League game of the day, Jamshedpur FC defeated rock-bottom Delhi Dynamos 2-1 at the JRD Tata Sports Complex through the sublime strikes of Tim Cahill and Farukh Chaudhary.

It was the away side Delhi Dynamos which drew first blood at the 24th minute after Lallianzuala Chhagte rocketed the ball past the goalkeeper. Rene Mihelic had given an exquisite pass to the youngster after collecting Narayan Das’ through ball.

It looked as if the game was heading towards a 1-1 draw before Farukh Chaudhary gave the Reds the lead. The Dynamos defender failed to clear a corner-kick and, Farukh latched onto the rebound and unleashed a powerful shot which the rival goalkeeper failed to answer.

At the 70th minute, the referee turned a blind eye towards a penalty claim from Delhi Dynamos as Nandhakumar’s shot was handled down by Robin Gurung. The Delhi players couldn’t recuperate from the decision and succumbed 2-1.

Sony Norde and Enrique Esqueda might miss out the Kolkata Derby

According to Sportskeeda, Sony Norde has torn his thigh muscle and is struggling to even run. The Haitian didn’t train with the ball in the first practice session of the week. Instead, he took part in basic stretching and cycling alongside physiotherapist Samiran Nag.

However, the website hasn’t ruled out the possibility of him entering the pitch as a substitute.

Enrique Esqueda, on the other hand, might be out for six to eight weeks. The Mexican striker had broken his rib in the previous match against Gokulam Kerala.

East Bengal’s latest signing Jaime Santos has received his international clearance and may make his debut in the match against Mohun Bagan. Toni Dovale, on the other hand, will arrive in Kolkata on Friday. However, his chances of making an appearance in the Kolkata Derby is extremely slim.

FIFA Workshop for the Technical Directors commences in Mumbai

Technical Directors are officials who are responsible for putting in place the framework for the improvement of both coaches and players in the country. A workshop conducted by FIFA to ameliorate the standards of the Technical Directors kicked-off in Mumbai with representatives from
Syria, Sri Lanka, Oman, Iran, and hosts India participating.

“I’m sure the Technical Directors workshop will help all participants go back enriched to their respective member associations and be a catalyst of change in their countries,” said FIFA Regional Development Manager for South Asia, Prince Rufu.