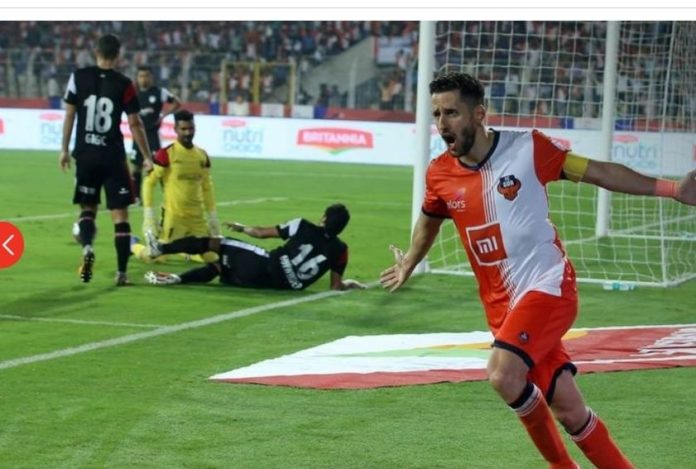 In case you missed out on yesterday’s edition, you can check it out here.

FC Goa thrashed Northeast United FC black and blue 5-1 at the Fatorda stadium in Goa in the Hero Indian Super League. This win takes FC Goa to the third spot on the points table with 20 points from 11 matches. Northeast United FC, on the other hand, is hanging by a narrow thread in the top four as they are just a point above the fifth-placed Jamshedpur FC after 12 matches.

Ferran Corominas inaugurated the goals galore for the home side after he connected Jackichand Singh’s cross from the right wing. Ten minutes later, Edu Bedia doubled the joy after dinking the ball past the kneeled down goalkeeper.

Hugo Boumous, too, basked in his glory as he scored the third goal for FC Goa. Coro made it 4-0 minutes at the 84th minute after doing a one-two with Hugo Boumous. Northeast United’s Bartholomew Ogbeche ensured FC Goa didn’t walk away with a clean sheet as he rocketed the ball after Mohammad Nawaz saved his initial shot.

However, the four-goal cushion was restored by substitute Miguel Palanca Fernández’s solo effort. The final scoreline remained 5-1 in favor of FC Goa who received an early Christmas gift from Northeast United FC.

FC Goa’s Ferran Corominas became the joint all-time top goalscorer in the Hero Indian Super League history when he scored against Northeast United FC at the 84th minute. The Spaniard is level on goals with the Canadian Ian Hume who has 28 goals from 63 appearances, spanning in all the four seasons.

Coro, on the other hand, has achieved the feat in only 30 appearances. Moreover, he has spent the entirety of his career in India playing for only one team- FC Goa. The Spaniard has also racked up more assists than the Canadian.

It remains to be seen whether Coro can overtake Ian Hume to become the highest goalscorer in ISL history. One ought to note that the Canadian hasn’t found the back of the net a single time this season.

Gokulam Kerala and Real Kashmir engage in a Twitter spat

One day before their I-League encounter, Real Kashmir FC and Gokulam Kerala FC engaged in a Twitter spat owing to unavailability for practice ground for Real Kashmir FC. Real Kashmir accused the Kerala-based team of abuse and denial of basic facilities like training and travel services.

Gokulam Kerala, in retaliation, said that there was a strike going on in Kerala and the club still managed to afford travel services to the Sringar-based side. Here are the pertaining tweets from both the sides:

Have been told @realkashmirfc are facing numerous difficulties down south in the run up to their clash against Gokulam Kerala FC to the point where they are unsure they will be safe playing tomorrow. Request local authorities to intervene to ensure safety of players & staff.

Cmon be a man and dont give lame excuses. Then how come did they reach the ground? and if they did somehow, why didnt you provide a training ground? This is disgrace to the football. Football is about passion and competing fairly not cheating

Does this look like a training ground??? Team @realkashmirfc had to train on this dump as no ground or transport provided for training today in Calicut.@ILeagueOfficial pic.twitter.com/OK0G4qi1Ed

RKFC head coach and staff being asked to leave training ground. ‘This is Kerala not Kashmir’ @realkashmirfc told. Strange. pic.twitter.com/kTjkqC1bEv

On other news, our Under 18 team has safely reached Tirur despite of hartal (especially because the arranged transport was not refused by them 😆) to start their @ILeagueOfficial Youth championship against SAT tomorrow. Good luck, boys. #U18YouthLeague

This is not a training ground. It’s a warm up area of the stadium, lol.

“To a point where they’re unsure they’ll be safe playing tomorrow?”

Probably that’s why they didn’t want to practice today? 🤔😀 https://t.co/jttNvklhwy

And just because @realkashmirfc admin woke up a bit early and blurted things out, it doesn’t mean it is the neither right or wrong. Keep your sentiments for “new club from Kashmir” aside and think through the whole situation! 🙏🏼 (n/n)

Since RKFC did not reach the practice ground on the allotted time, we have even requested to extend the time hoping they might reach a bit late and train which was agreed by the Medical College. But no, that did not happen. (6/n)

Remember, Medical college ground is probably the best of all the grounds that we have here. Getting a practice ground here is not easy and we agree that we couldn’t provide the best for all the teams, which is why we practice in the same ground we provide to the opponents. (5/n)

Why was the bus provided not used by them to get to the medical college ground when we had already arranged everything even in harthal? They did train the previous day in the same place.

Why invade the stadium to train when it is not allowed by M. Comissioner?(4/n)

RKFC officials stormed the FOP and manhandled the groundsman and threw his phone away when he tried to capture what Mr. Robertson and his club members tried to do.

Before the bus arrived, RKFCs officials who are staying in a nearby hotel invaded the EMS Stadium, where training a day before the match is not allowed by any MC. To keep this in track, we refused to let them train in the EMS. (2/n)

Update: Today is ‘Harthal’ (Strike) organised by a political party. After a long previous night of arrangements to get the transport for both the teams, we managed to send the bus for RKFC. Medical college ground was booked for RKFCs training. (1/n) pic.twitter.com/xF69SP64D7

Earlier in the I-League, Indian Arrows held Aizawl FC to a 0-0 draw at the Barabati Stadium in Cuttack. This draw doesn’t change the position of either of the teams in the table as they find themselves in the 10th and 11th position respectively.

The first half was a drab one with Rahim Ali only getting the meaningful chance of the match which he headed across the crossbar. Boris Singh’s shot hitting the woodwork and Anwar Ali’s 40-yard scorcher going agonizingly close were the other two notable instances of the match.