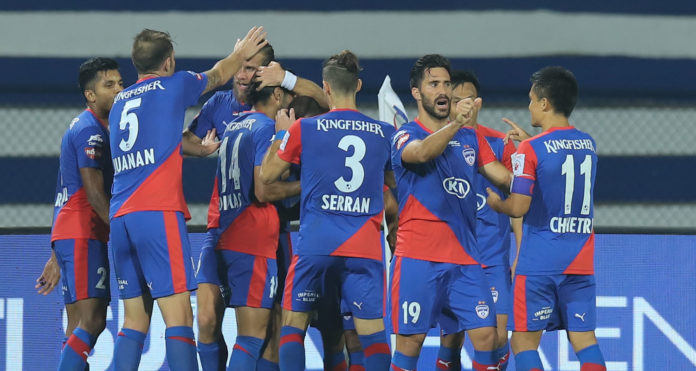 In case you missed out yesterday’s edition, you can check it out here.

Bengaluru FC pipped ATK in an exhilarating encounter at the Shee Kanteerava stadium in Bangalore in the Hero Indian Super League. This win consolidates the Blues’ spot on the top of the table as they are six points above the pack. ATK, on the other hand, are three points behind fourth-placed Jamshedpur FC, having played the same number of matches.

The referee denied two penalties to Bengaluru FC on the first half as Andre Bikey and Ricky Lallawmawma handled the ball inside their own penalty box. However, Bengaluru FC was able to put that distraught behind them and broke the deadlock at the 37th minute thanks to Erik Paartalu.

Kean Lewis gave a splendid cross from the left wing and, the Aussie towered above John Johnson and Andre Bikey to head it past the goalkeeper. As the game resumed in the second half, ATK was the more lively of the two sides and took the direct approach.

Balwant Singh found himself one-on-one with Gurpreet on two separate occasions but, he squandered the opportunities both the times. ATK took the direct approach, but Balwant Singh and substitute Eli Babalj were continuously caught offside by the Bengaluru back-four. The game ended 1-0 in favor of Bengaluru FC who will enter 2019 unbeaten.

India’s group stage opponents for 2019 AFC Asian Cup, Thailand, released a 27-member probable squad for the quadrennial extravaganza. India will kickstart their campaign against the War Elephants on 6th of January in Abu Dhabi. Although they are ranked 21 spots behind them, India cannot take them lightly.

Here is the squad:

The clubs were informed of the ban after they weren’t allowed to participate in the Guru Teg Bahadur tournament. The tournament organizers told the club management that they received directions from the PDFA to refuse them the participation.

They further announced that Enrique Esqueda would be heading towards Mexico after the injury he sustained on his left rib in the match against Gokulam Kerala. He will back with the team on January 2019.