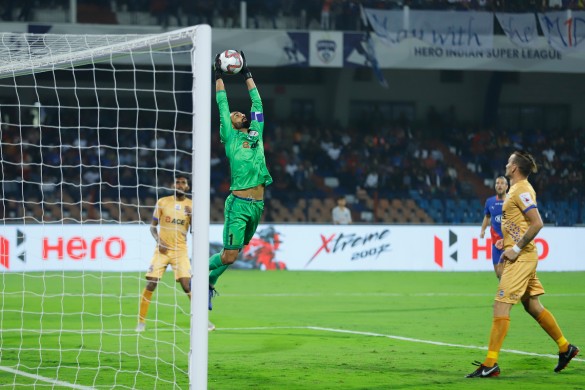 Welcome to our first installment of the daily Indian football news. In this section, you will find all the news pertaining to Indian football that happened on the given day.

What happened in the ISL top-of-the-table encounter between Bengaluru FC and Mumbai City FC? Did Aizawl FC end Churchill Brothers’ undefeated streak? What is former India U-23 footballer Prathamesh Maulingkar up to now? Don’t worry! We have covered all that for you in this edition of the Indian football news.

In the only ISL game of the day, Bengaluru FC and Mumbai City FC shared the spoils at the Shree Kanteerava stadium. Udanta Singh drew first blood for the hosts at the 23rd minute after heading in Rahul Bheke’s inch-perfect cross by towering above the much-taller Lucian Goian. The joy was short-lived as Modou Sougou equalized eight minutes later as Arnold Issoko spotted his run after Nishu Kumar had played him on marginally.

Sehnaj Singh was shown the marching orders at the 52nd-minute after being shown the second yellow. Bengaluru FC pressed forward in search of the winning goal, but despite being a man down, the Islanders held their nerves to see out a 1-1 draw.

Bengaluru FC still lead the pack with 24 points from 10 matches. Mumbai City FC, on the other hand, sit just a place behind them with 21 points from 11 matches.

In the earlier match at the I-League, Churchill Brothers routed Aizawl FC 4-1 to continue their unbeaten run. Khalid Aucho gave the home side the lead at the 23rd minute after the rival goalkeeper failed to read the trajectory of Israel Gurung’s free-kick. The Ugandan paid him dearly with a simple tap-in.

The provider Israel Gurung turned into the goalscorer a minute later as he connected Dawda Ceesay’s cross from the left flank. Aizawl FC did pull one back as the game resumed from half-time through Ansumana Kromah. However, substitute Anthony Wolfe gave back Churchill Brothers the two-goal cushion after rocketing it past the goalkeeper.

At the 78th minute, Alfred Jaryan handled Wayne Vaz’s cross inside the box to reward Churchill Brothers the penalty. Willis Plaza stepped up and converted from the spot to score his eighth goal of the I-League. This win takes Churchill Brothers to the second position with 13 points from 7 games, four points behind league-leaders Chennai City FC.

Former India U-23 footballer Prathamesh Maulingkar became the first Indian to become Mr. Supranational after he was crowned the winner at Krynica-Zdroj in Poland. This is the third edition of the event which has an aim to “discover new talent for modeling and television industries and to produce instant celebrities.”

Prathamesh played for Pailan Arrows and Dempo in the I-League as a midfielder and even scored two goals in the league. He even represented the India U-23 team against Iraq U-23 team at the 2013 AFC U-22 Asian Cup Qualifiers which they lost 1-2. His footballing career got derailed after he suffered a shoulder injury which took him out.

ARA FC Director Vikram Patel recently took part in an interview with Rutvij Joshi of Khelnow. Therein, he disclosed that the Ahmedabad-based side will not field any foreigner in the I-League second division.

“We just got the license for the I-League Second Division and it is the first time in the history of Gujarat football that the I-League licensing has been happening and some teams have taken the initiative to build its own team,” further added Vikram Patel.

Mizoram won the 2018-19 edition of the Junior National Football Championship by defeating Punjab in the finals. In the 2016-17 and 2017-18 edition of the tournament, it was Punjab who got the better of Mizoram. However, the Northeastern side got their sweet revenge this time as they pipped Punjab 2-1 in the finals.

That’s it from us. Be sure to catch the daily roundup of Indian football news only on Sportsindiashow.