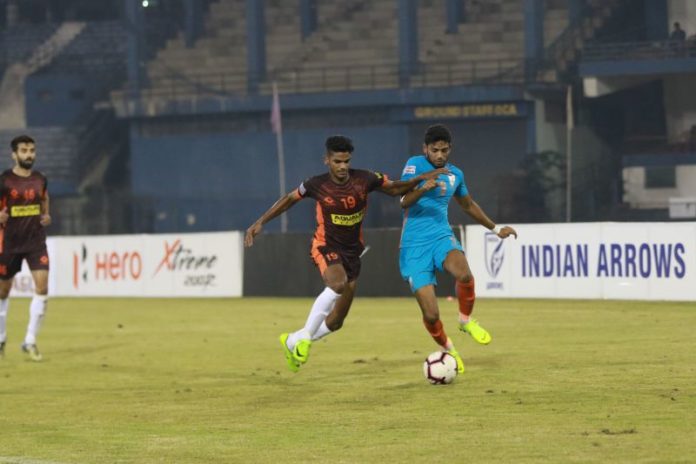 Welcome to another installment of our Indian football news roundup. In this section, you will find all the news pertaining to Indian football that happened today. Today, we will talk about ISL transfer news and Indian Arrows’ second victory in the Hero I-League.

In the I-League, Indian Arrows registered their second win of the campaign. Furthermore, the referees’ list that will officiate in the 2019 AFC Asian Cup is also out. Surprisingly, no Indian referee figures in the list.

Indian Arrows registered their second win of the 2018-19 Hero I-League by pipping Gokulam FC 1-0 at the Barabati Stadium in Cuttack. This win takes the Blue Colts to the ninth position on the table. The Malabarians, on the other hand, remains on the eighth spot.

The match started on a cagey affair with the defenders winning the duel in the final third. Apart from Rahim Ali’s shot in the 30th minute which kissed the woodwork, no other promising chance was created in the first half.

Gokulam FC coach Bino George made a blunder by taking out Christian Sabah and PA Nasar, two midfielders, and bringing in two forwards, S Rajesh and Suhair VP. The Indian Arrows got the upper hand in the midfield and were rewarded in the hour mark when Guilherme Castro shoved down Vikram Pratap Singh inside the box.

The referee pointed towards the spot and, Amarjit Singh Kiyam converted the penalty to give Indian Arrows a slender 1-0 lead. The AIFF Developmental side would cling onto it and grab all the three points.

AFC Asian Cup 2019: No Indian referees to officiate in the tournament

Asian Football Confederation, the highest governing body of football in Asia, released a list of 30 referees and 30 assistant referees for the 2019 AFC Asian Cup. The list includes referees from countries like Sri Lanka, Malaysia, and Singapore but not India, who are ranked ahead of them.

India has six FIFA referees and eight FIFA assistant referees, who are allowed to take charge in official tournaments like the AFC Asian Cup. However, none of them even made it to the standby list.

Moving on to the ISL transfer news, Kerala Blasters has made their first signing since the sacking of their previous manager David James. According to Sportskeeda, Nongadamba Naorem, famously known for scoring a wonder-goal against Shillong Lajong in 2017, has signed a deal with the Kerala side.

According to Goal.com, Indian international footballer Pritam Kotal has signed a three-and-a-half year deal with two-time ISL champions ATK. The Kolkata-based side has paid Delhi Dynamos a transfer fee of more than 15 lakhs to pen the deal.

The 25-year-old will earn more than a crore each in every year as a part of the deal. Pritam Kotal is currently training with the Indian football team in UAE as part of their preparation for the 2019 AFC Asian Cup. Once, the tournament is over, he will join the ATK setup.

Despite rumors being rife that Cavin Lobo will move to East Bengal to bolster their midfield prospects, the man has himself clarified that he will stay with ATK.

In an exclusive chat with TalkSports 24×7, the 30-year-old told that it is not true. Cavin Lobo plans to stay with ATK and is working hard to break into the first team.