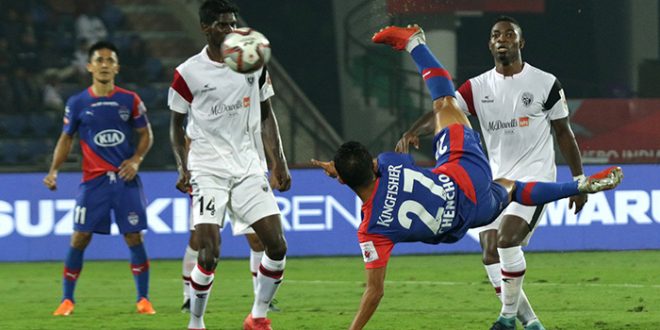 Welcome to another installment of our Indian football news roundup. In this section, you will find all the news pertaining to Indian football that happened today. Today, we will talk about the preview and predictions of India vs. Oman friendly match and the latest ATK and Bengaluru FC transfer news.

India vs. Oman: Preview and Predictions

India will cross swords with Oman in a friendly match in their run-up to the 2019 AFC Asian Cup at the Baniyas Stadium in Abu Dhabi. The last time these two sides met, Oman humiliated India with a 3-0 victory.

Oman is currently ranked 82, whereas India is ranked 97. Moreover, Oman will be more accustomed to the climate conditions of UAE as they are their Gulf neighbors.

Oman is undefeated in 2018, winning five and drawing six times. Under their manager Pim Verbeek, they won the 2018 Arabian Gulf Cup and will be raring to inflict another defeat on India. The Arabian team likes to play it slowly from the back and reduce the tempo of the game.

India on the other hand, will like to sit down deep, absorb the pressure, and attack on the counter. While this may irk a lot of fans, it has done wonders for Stephen Constantine and his team. With this tactic, the Indian team broke into the top 100 of FIFA rankings and qualified to the 2018 AFC Asian Cup after missing out on the previous edition.

The match won’t be telecast as both the managers don’t want to expose their vital tactics just before the tournament. Although the match will be played behind closed doors, the viewers can catch the live updates of the match through the official Twitter handle of Indian Football Team.

According to Sportskeeda, Bengaluru FC is on the verge of releasing Bhutan’s Chencho Gyeltshen. The Bhutanese is currently rehabilitating in Bhutan after the injury he sustained in Bengaluru FC’s last ISL encounter.

Chencho is primarily a left-winger but has been deployed as a No. 9 or striker under Carles Cuadrat. Other than the last gasp equalizer against Northeast United FC, which helped Bengaluru FC in keeping their unbeaten run intact, Chencho has barely fit Carles Cuadrat’s plans.

With the league nearing its business end, releasing Chencho Gyeltshen might be a profitable venture.

According to Sportskeeda, ATK might sign in Miguel Palanca on loan from FC Goa. The Goan side had deregistered the Spaniard on Tuesday before signing Morocco’s Zaid Krouch.

ATK require the Spaniard as the team lacks a genuine out-and-out striker. Since the departure of Kalu Uche and Emiliano Alfaro getting injured before kicking a ball in the practice session, ATK have struggled to find goals.

Miguel Palanca has scored 3 goals despite playing just 162 minutes for FC Goa. A move to misfiring ATK might just be the move what the doctor ordered.

In a bold decision taken by the AIFF, the highest governing body of football in India has decided to nullify the results of five Women’s State Leagues in India. This is because the leagues didn’t function as per the guidelines of the AIFF.

The five concerned states are Maharashtra, Uttar Pradesh, Haryana, Rajasthan, and Goa. These states will have to re-conduct their State League if they want a team from their state to play in the third season of the Indian Women’s League.

In an exclusive interview with Indian Express, Indian football legend IM Vijayan alluded on the Blue Tigers’ chances in the 2019 AFC Asian Cup. This is what he had to say:

“I think we can do well. We will definitely be playing matches where a win is not out of question. We drew against China and they are one of the better teams in the continent. Plus playing in Abu Dhabi will be similar to a home game. There are a lot of Indian expats there and I remember them flocking them to the stands whenever I was playing here. I am sure it will be the same in the Asian Cup.”