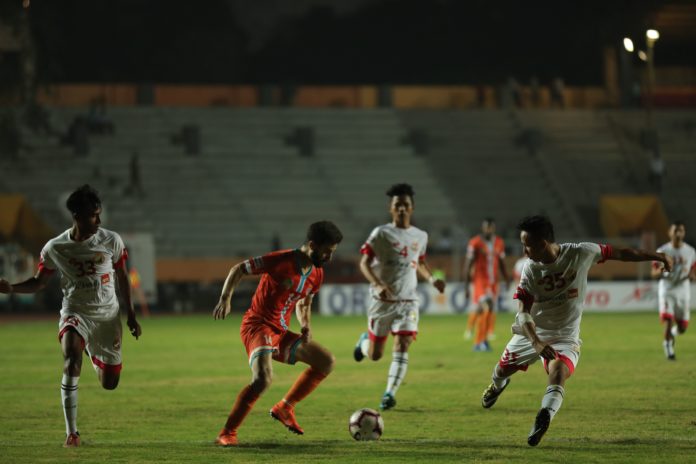 Welcome to another installment of our Indian football news roundup. Today, we will discuss primarily the I-League live scores and the rumors floating in social media that AIFF and Stephen Constantine will part ways after 2019 AFC Asian Cup gets over.

Chennai City FC obliterated Shillong Lajong 6-1 in their Hero I-League match at the Jawaharlal Nehru Stadium in Coimbatore. This is the Shillong-based side’s fourth consecutive loss.

Nestor Gordillo broke the deadlock for Chennai City FC in the 12th minute after connecting Sandro Rodriguez’s brilliant corner-kick. It was deja vu for the home side in the 38th minute after Roberto Eslava headed in Sandro’s corner to double the lead.

As the team came out of the tunnel, Chennai City FC tripled the lead after Samuel Lalmuanpuia made a grave error. The 20-year-old mispassed the ball towards Edwin Vanspaul in the defensive third who spotted Pedro Manzi’s run. The Uruguayan-born chipped the ball above the goalkeeper to make it 3-0.

Samuel Lalmuanpuia made amends to his error by scorching in a 35-yard free kick. Edwin and Nestor’s combination worked wonders again in the 69th minute when the Spaniard made it 4-1. Manzi completed his hat-trick by bulging the back of the net in the 78th and 80th minute.

In another I-League match played on Saturday, Aizawl FC defeated Gokulam FC 3-2. The match was played behind closed doors and fans of both the teams couldn’t see their teams in actions.

Ansumana Kromah broke the deadlock in the 50th minute after a drab and tepid first half. Lalkhawpuimawia scored in the 63rd minute before Rocharzela tripled the lead in the 70th minute.

Joel Sunday scored two goals in the dying embers of the second half but, the final scoreline remained 3-2.

I-League Live Scores: Light goes out in the match between Chennai City FC and Shillong Lajong

In the game between NEROCA and Shillong Lajong, lights went out in the 90th minute. The light returned after 15 minutes much to the relief of the match organizers.

This just shows the level of unprofessionalism by the I-League organizers. A thing like this is hard to imagine happening in the Indian Super League. Although the I-League is the highest division of football in India, the organizers don’t seem to take it that seriously.

In a bid to calm down the frenzy in social media that Stephen Constantine and AIFF will part ways after the 2019 AFC Asian Cup gets over, the AIFF released a statement. This is what AIFF General Secretary Kushal Das said:

“It’s completely baseless and utter rubbish. We’re completely focused on AFC Asian Cup UAE 2019. The team has been performing excellently under Stephen Constantine having risen to 97 from 173 in the FIFA ranking in less than 4 years. It is sad that media is indulging in baseless and silly speculation before such an important tournament of the National Team.”

Seven I-League clubs, including defending champions Minerva Punjab, have formed a group called I-League (Private) Clubs Association. The aim of this association is to fight against the so-called “injustice” by the AIFF.

Indian Arrows, East Bengal, Mohun Bagan, and Churchill Brothers are the four clubs not part of this group. This is what Minerva Punjab owner Ranjit Bajaj told the press, “There is a concerted effort to destroy the I-League. The time has come for all of us to protest unitedly and, if needed, approach the court.”