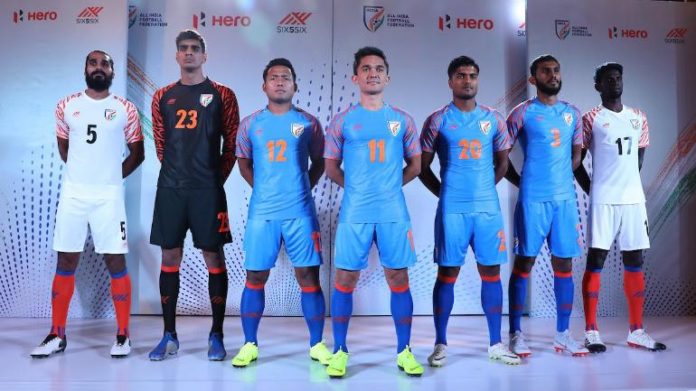 If you had missed out our previous edition of the Indian football news roundup, you can check it out here. Without any further ado, here is today’s roundup of Indian football.

Indian football team coach Stephen Constantine announced a 28-member squad that would be boarding the plane to UAE on Thursday. Earlier, a 34-member squad was assembled by the Englishman for training. Sahal Abdul Samad, Komal Thatal, Jerry Lalrinzuala, Nishu Kumar, Nikhil Poojary, and Bikash Jairy are the six members axed.

The Indian football team also launched its new kit sponsored by Six5Six in a glitzy ceremony in New Delhi. One important feature of the new kit is that it has tiger strips embellished on its sleeves. Nike was the Indian football team’s previous sponsor. Gurpreet Singh Sandhu, Sandesh Jhingan, Jeje Lalpekhlua, Rowllin Borges, Shubhasish Bose, and Pritam Kotal did the honors of unveiling the kit to the globe by walking down the aisle.

Speaking on the press conference conducted by the AIFF after the kits were launched, Praful Patel sounded highly confident of the Indian football team’s chances of qualifying for the 2026 FIFA World Cup.

“But the Asian dream has to be first achieved before we move on to the next dream. I would say that 2026 will be our next mission since there will be eight Asian teams entering that World Cup. I think with the current form, if things go right and we really put our minds and hearts together, along with Sunil Chhetri and his men putting their feet together, we can definitely qualify for the 2026 World Cup,” said the President of the AIFF.

In an entertaining I-League game held at the Tau Devi Lal stadium in Chandigarh, Mohun Bagan pipped Minerva Punjab 1-0 to continue their I-League title hunt. Mohun Bagan had put aside their loss and displayed a commendable performance against the defending champions.

AIFF General Secretary Kushal Das said that Mohun Bagan and East Bengal can join the ISL next season if they give 15cr as the franchise fee. “Provided they (I-League clubs) fulfill the ISL criteria, it is possible as part of restructuring,” said Kushal when asked if the two legendary Kolkata clubs can be a part of the ISL next season.