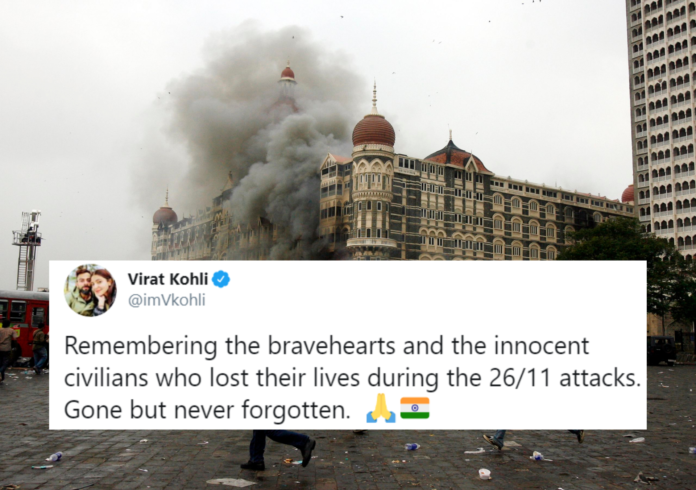 Its been eleven years ever since India was shocked by the devastating terrorist attacks which took place in Mumbai on 26th November 2008.

The attacks paralysed Mumbai, the financial hub of India and almost 166 people lost their lives to the cowardly attacks. 10 Lashkar-e-Taiba terrorists came to Mumbai via sea route from Karachi and carried out a series of attacks throughout Mumbai. 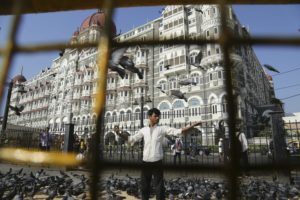 Indian cricket team players took to twitter to remember the victims of these deadly attacks.

Remembering the bravehearts and the innocent civilians who lost their lives during the 26/11 attacks. Gone but never forgotten. 🙏🇮🇳

It’s been 11 years, but we shall not forget the sacrifices of our brave police & armed forces. They took the fall to ensure the nation and humanity stands tall. My heart goes out to the families of all affected victims. #MumbaiTerrorAttack

A silent prayer for those who lost their lives untimely on 26/11 #MumbaiTerrorAttack and the brave heroes who sacrificed their life to protect us. 🙏

Still remember how the city came to a standstill during the 26/11 attacks. The exemplary courage shown by security forces deserves huge respect. Let our prayers always be with them.

Tributes to our brave officers and citizens who sacrificed their lives for our safety, 11 years ago, today. Salute to the brave hearts of our country! 🇮🇳 #MumbaiTerrorAttack #MumbaiAttacks

26/11 took innocent lives as it gave birth to unsung heroes and martyrs who continue to inspire us with their valour. My salute to those who gave up their lives to protect us. We will always remember you fondly. #MumbaiTerrorAttack pic.twitter.com/i5EN7Q4fdx

Remembering our brave soldiers who sacrificed their lives for our safety. Saluting the heroes of our nation on this day. #MumbaiAttacks pic.twitter.com/NkSG9HY0Ec

The attacks were one of the most devastating this country had ever seen. The terrorists attacked Oberoi-Trident Hotel and Taj Mahal Palace and Tower Hotel, Chabad House at Nariman Point, Leopold Cafe, Chhatrapati Shivaji Terminus railway station and Cama Hospital.