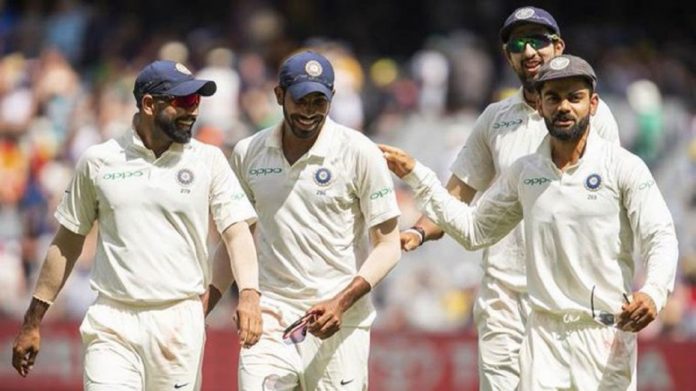 As the first-ever Day-Night Test between India and Australia in Adelaide commences, both the sides will be looking to take an early lead in the Border-Gavaskar Trophy to gain some confidence and momentum for the rest of the series.

One of the prime reasons for India winning their maiden Test series in Australia back in 2018-19 was its pace bowling trio of Mohammed Shami, Jasprit Bumrah, and Ishant Sharma.

The trio bowled with pace, venom and hostility and effectively outbowled the famed trio of Pat Cummins, Mitchell Starc and Josh Hazlewood. Just like Virat Kohli and Co, the bowlers need to read the conditions when they see a little bit of bounce and start bowling short. It’s very important to understand their pace and back their strengths.

India may have a very good pace bowling attack at this stage, but the Australians know the conditions better than the touring fast bowlers, who’ll need to be on top of their game all the time.

Even in the absence of the experienced Ishant Sharma, the India team boasts of a lethal pace-bowling attack, led by Jasprit Bumrah and Mohammed Shami and backed up by the likes of Umesh Yadav and rookie duo of Mohammed Siraj and Navdeep Saini.

Ishant Sharma’s form, especially in overseas conditions since 2018, has been absolutely sensational. He has picked up as many as 53 wickets in just 13 Tests at a brilliant average of 20.

The 32-year-old has played 97 Tests and been India’s premier bowler in the longest format for a while. As India’s other reserve pacers in Navdeep Saini and Mohammed Siraj are inexperienced, Umesh Yadav’s experience would come in handy as the third seamer.

Since the start of 2017, Indian pacers have claimed a total of 371 wickets in 201 innings and their average of 22.75 is the best among all teams. This goes to show how Indian fast bowling unit has impinged itself as the best in the world.

In the 2018-19 series, Indian bowlers received high praise after their historic first Test series victory in Australia. Them reading Australian conditions, and striking early with the kookaburra ball that can lose sting once the shine wears off, it was a coming of age story.

India has always produced world-class spinners, but what stunted their performances overseas was a genuinely good pace attack, with extra 10-15 yards. However, something changed shifted after the 2014 England series in England, which India lost by 3-1.

The lone test that India won at the Lord’s was on the back of a mind-bending spell of fast, short-pitched bowling by Ishant Sharma. Until then, India depended heavily on spinners like Pragyan Ojha, Ravichandran Ashwin, Ravindra Jadeja to give them the breakthroughs.

But the seamless transition of encouraging fast bowlers on Indian wickets happened when Virat Kohli took over the reins. In the end, you need 20 wickets to win a Test and that is what will matter down under in Australia.

Apart from the injured Ishant Sharma, Mohammed Shami (180 wickets from 49 Tests), Umesh Yadav (144 wickets from 46 Tests) and Jasprit Bumrah (68 wickets from 14 Tests) were exceptional in-home and away Test matches during 2018 and 2019 seasons.

Virat Kohli and team management will be hoping that Indian bowling unit replicates that during the Border-Gavaskar series.

Australia would be buoyed by the return of Steve Smith and David Warner to the Test fold. The emergence of Marnus Labuschagne has been nothing short of a boon for them.

No doubt Smith, Warner and Labuschagne are great players. But the good part about our current crop of bowlers is that most of them play in the same series and our bowling unit will also not be very different from what it was in 2018-19.

But India’s bowling attack looks ready and the incentive for them is to have their names carved in the history of Indian cricket by winning a consecutive series Down Under.

In 2018, Jasprit Bumrah was leading the Indian bowling unit and played wrecker-in-chief as he bagged 21 wickets at an average of 17.00, which also included a five-wicket haul. Nathan Lyon matched the tally but was not able to have the same impact as Bumrah had for India in that series.

Shami and Ishant backed up Bumrah with 16 and 11 wickets respectively as the Indian pacers hunted in packs throughout the course of the four Tests. Ravindra Jadeja (7), R Ashwin (6), Kuldeep Yadav (5) and Umesh Yadav (2) all played crucial supporting roles.

In six weeks’ time, the fate of the Border-Gavaskar series will be decided, and the Indian bowling unit will have a big say in which captain has his hands on the trophy.