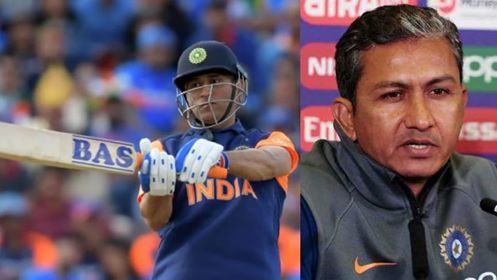 India succumbed to their first defeat in this World Cup on Sunday, against England. Dhoni scored 42 off 31 balls in that match. But this strike rate did not match the rate of scoring required at that stage. The low strike rate in his innings resulted in many questioning his intent. Many cricketing legends did not like the way Dhoni went about his innings on Sunday.

Former New Zealand skipper called the innings as ‘bizarre’. On the other hand, former Indian spinner Murali Karthik felt that the Dhoni should have at least ‘gone down fighting.’

However, India’s batting coach, Sanjay Bangar does not agree with these comments. According to Bangar, there was ‘nothing wrong’ with the way Dhoni played.

When Bangar was asked about Dhoni’s innings after India’s first defeat, he said, “MS was striking the ball really well. He had good intent. The English bowlers, however, executed their plans really well. They used the angles and used the large boundaries to their advantages, and they were bowling to a shorter side of the boundary.”

“I mean, I didn’t really find anything wrong in MS’s innings. He was batting beautifully. He had struck a few big blows, and it’s just that in the last four or five overs, the difference between runs required and balls left just kept on creeping up,” he added.

The Pakistani media also slammed the former Indian skipper as this defeat of India has dented their hopes of qualification very weak.

Naseer Hussain too expressed his discontent about Dhoni’s batting. “I am completely baffled. What’s going on! This is not what India needed. They need runs. What are they doing?” he said.

After the game, it was not just the batting coach but also the Indian skipper who came to Dhoni’s defence. “It’s up to the discussions with the two guys in there. MS kept trying to get the boundary. It wasn’t easy because they were bowling really well. ‘When the run-rate got to 14-15 it became tough. We will sit down and assess and try to improve in the next game,” said Kohli.