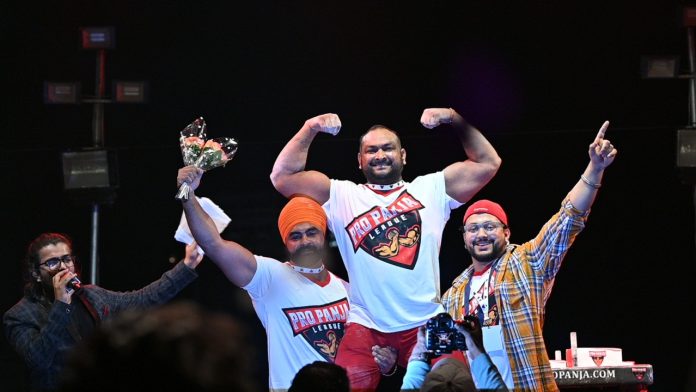 His last Arm Wrestling bout took place on 19th March against Pro Panja League’s 90 KG champion Siddharth Malakar in a ‘Super-Fight’ for the ‘Pro Panja Super Champion’ Belt. While he had lost the match, it was a hard-fought victory for Siddharth, as Sunil Kumar showed yet again why he is one of the best Arm Wrestlers in India and why he always pushes himself to compete against the best in and around his division. 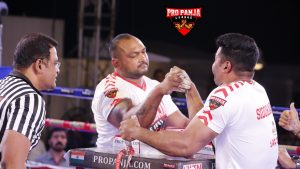 Sunil Kumar leaves behind a legacy that will be hard for other Arm Wrestlers in India to emulate. He himself has inspired numerous youngsters to take up the sport of Arm Wrestling and has been a tremendous ambassador for the sport.

While he was an intimidating figure on the Arm Wrestling table, he was an equally soft-spoken person who would always be respectful with fellow Arm Wrestlers and never engaging in ‘Trash Talks’ for promotions which is usually the norm around the world. Despite reaching the pinnacle of the sport in the Indian Arm Wrestling circuit, he never was the one to boast about his accomplishments.

His humbleness can be derived from the fact that he would always credit his victories to his ‘Babaji’, a Hindu Deity. Sunil Kumar claimed that when he was going through the lowest of the lows in his life, it was his ‘Babaji’ who looked after him in his own divine manner and later with his blessings would catapult Sunil Kumar to becoming a heavyweight champion in Pro Panja League, which is the biggest Arm Wrestling organisation in Asia.

Siddharth Malakar, who competed against Sunil Kumar for the Pro Panja League Mega Champion belt revealed that the news really shocked him and revealed that he was a big loss for the Arm Wrestling community in India. Even though both athletes were fierce competitors, they had mutual respect for each other.

“It was really shocking for me. I didn’t think expect anything like this to happen. He was a legendary player and he was getting better as he aged and he always performed to the best of his abilities on the table. To lose a player like him is a very big loss for the Arm Wrestling community,” Siddharth Malakar said.

A huge loss to the Indian ArmWrestling community…Sunil ji was a Champion for many years and an inspiration to upcoming ArmWrestlers…he was one of the biggest supports and believers in the Pro Panja League…a gentle giant to the core…he will be sorely missed…Om Shanti 🙏🏻 https://t.co/djYhwlXbzx

The president of the Indian Arm Wrestling Federation, Mr Hashim Reza Zabeth also released a statement on the untimely death of Sunil Kumar.

“It was Very Shocking to know the sudden Demise of our Armwrestler Sunil Kumar.Very Sad News. He was one of the most Discipline Sports Person. May his Soul Rest in Peace”

The Sports India Show team offer their condolences to the friends and family of Sunil Kumar.