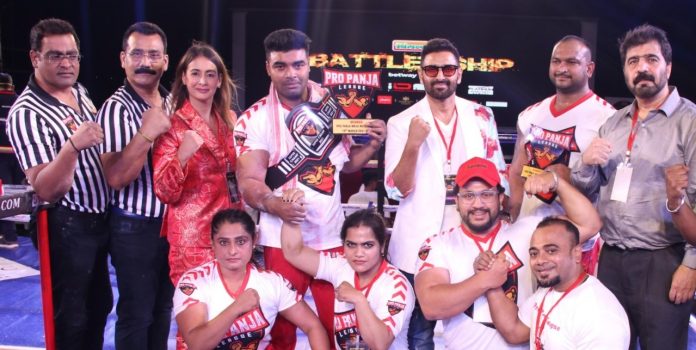 The Indian Arm Wrestling Federation, which is the internationally recognised governing body for Arm Wrestling in India is all set to host a national tournament named as Sheru Classic Arm Wrestling Championship at the International Health, Sports and Fitness Festival (IHFF) in association with Pro Panja League.

IHFF, which will take place on 03rd – 4th & 5th December 2021 at Mumbai, will feature some of the world’s most muscular and fittest Men & Women Athletes in India.

Indian Arm Wrestling Federation and IHFF have been in partnership since 2016 and throughout the years it has featured the best Arm Wrestlers in the country.

The event will feature nine weight classes (60,70,80,90,100,+100 for men, women below & above 60kg and Specially-Abled category). There will also be a Champion of Champion match-up. Pro Panja League, which is the largest professional Arm Wrestling organisation in India will be giving out the prizes to the winner.

Mr Parvin Dabas who is the owner of the Pro Panja League pledged total cash prizes worth ₹1,50,000 for the winners as well as Pro Panja T-Shirt and other merchandise for all the participants.

How much cash prize will be on the line?

Sports India Show had the opportunity to chat with the owner of Pro Panja League, Mr Parvin Dabas, who gave his thoughts on this event.

“Sports has seen very hard days during the pandemic during which saw Pro Panja League hold three hugely successful events…we are very happy that our partners the Indian ArmWrestling Federation is conducting the IHFF ArmWrestling Championship and we are fully supporting them in this event with cash prizes for the winners and merchandises for all the participants…I wish them all the best,” Mr Parvin Dabas said.

Sports India Show also reached out to IAF president Mr Hashim Reza Zabeth to talk about the upcoming event and how having Pro Panja League as a partner will further elevate the Sheru Classic event.