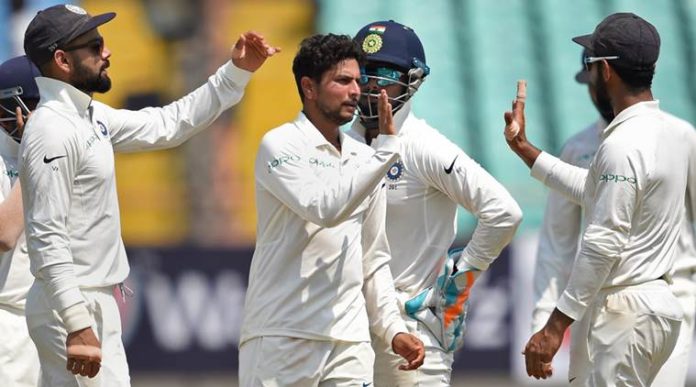 It took India less than 100 overs to bowl out Windies twice as they recorded their biggest win of their test history by an innings and 272 runs. The spin trio of Ashwin, Kuldeep and Jadeja picked 16 wickets between themselves to wrap up the game in just 3 days. 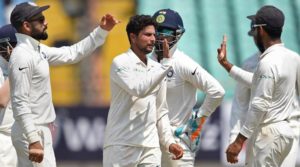 Windies who were staged at 94-6 after the close of play on day 2 came out in an aggressive approach on 3rd day to counter the spin attack. Roston Chase and Keemo Paul added 54 runs in quick time before Umesh returned to remove Paul. Ashwin then picked up the remaining 3 wickets to gain a lead of 468 runs for India.

The hosts wasted no time in enforcing the follow-on looking to close the innings in quick time. Windies tried showing some resistance second time around as Kieran Powell played an attacking knock of 83 in just 93 balls.

But following Powell’s wicket, the floodgates opened once again leading to another collapse. If it was Ashwin’s show in the 1st innings, this time Kuldeep came to claim the honors. Starting from Powell, he removed the 4 incoming batsmen in quick time to claim a 5 wicket haul.

Ashwin and Jadeja then returned to claim the remaining wickets as Windies innings folded for 196, handing India a win by innings and 272 runs. This win marked the team’s biggest win in their test history.

Closing in the game in 3 days will mean that the teams will now have additional break of 2 days to regroup before the next one kicks off. The second and final test will begin on 12th October at Hyderabad.

Is Anushka Sharma’s presence detrimental to the Indian Cricket Team?