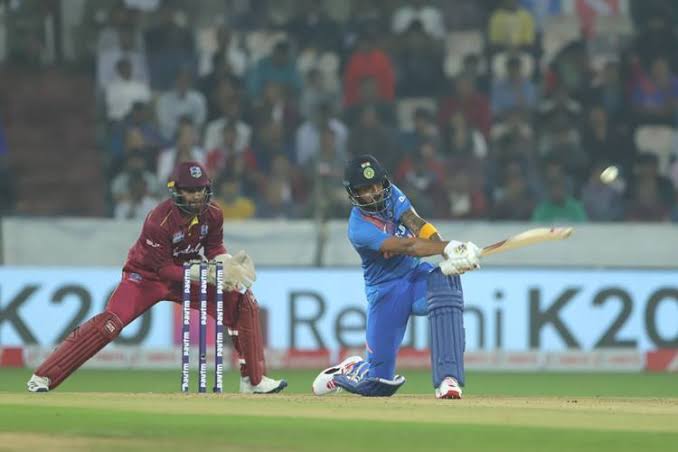 Captain Virat Kohli’s splendid 94* saw India chase down the target of 208 set by the Windies and took a 1-0 lead in the T20 series at Hyderabad on Friday. 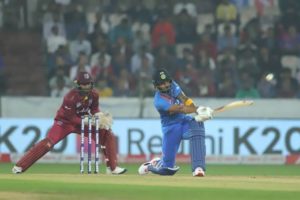 After having lost the toss and been put into bat first, West Indies openers got off to a flyer, courtesy of Evin Lewis. Despite Chahar removing Simmons in his very first over, Lewis did not hold back and took every bowler to the cleaners.

Quick fire 40 from Lewis (3 fours, 4 sixes) saw  the visitors score at 11 runs per over in the powerplay. Even after his dismissal, the side showed no signs of respite, with Brandon King and Hetmyer taking control.

After King (31) was stumped to Jadeja in the 11th over, the side were already scoring at 10 runs an over. Pollard then entered the scene to join hands with Hetmyer and take full control of the game.

The duo put on a total of 71 runs for the 4th wicket in no time.

Hetmyer smashed 56 while Pollard played a blinder of a knock (37 off 19). Both their innings combined consisted of 8 sixes.

Chahal brought the hosts back into the game by removing both in the 18th over. But a vital cameo from Holder in the end propelled the score in excess of 200.

Coming on to chase a stiff target, India lost Rohit Sharma early for just 8 runs. This is when the duo of KL Rahul and Virat Kohli joined hands to put on a century partnership for the second wicket in no time.

Despite both Rahul and Virat reaching their respective half centuries in quick time, the duo lacked timing and missed out on many deliveries. Khary Pierre finally removed Rahul for 62 but enough damage had already been done.

Rahul’s solid knock off 62 consisted of 5 fours and 4 huge sixes. Following his dismissal, Kohli carried on, displaying his wide array of shots along with Pant on the other end.

With 68 needed off the final 6 overs, Kohli first took Holder for 15 runs in one over. He then followed it up by smashing Williams for 23 runs in the next over. This saw the game move firmly towards India’s favor.

Despite losing Pant and Iyer in quick succession following the onslaught in the overs preceding it, Kohli continued to display his fine form and took India home.