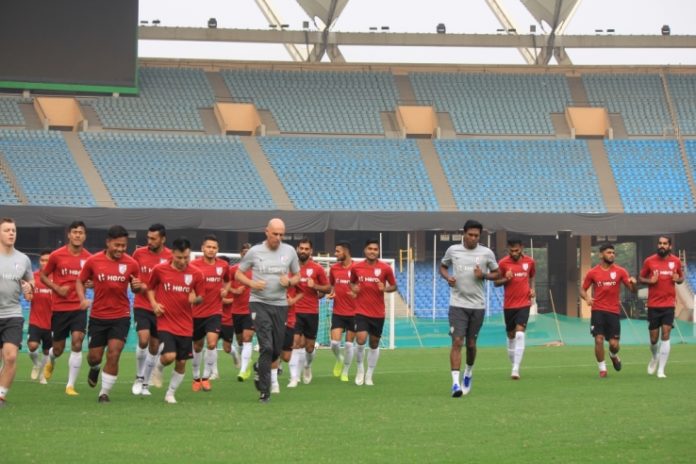 India will battle out with Middle-East giants Jordan on 17th November at 10:30 p.m. IST at the King Abdullah Stadium II in Amman. India will be without Sunil Chhetri thanks to a grade one ankle injury he suffered in the game against Kerala Blasters at the Hero Indian Super League.

Meanwhile, Jordan is coming off a 1-2 loss against Croatia and a 0-0 draw against Albania and Oman, thus making their new manager Vital Borkelmans winless in the three games he has been at the helm.

India is expected to line-up with a 4-4-2 formation with Jeje Lalpekhlua and Manvir Singh or Balwant Singh up front. Udanta Singh and Halicharan Narzary will be marauding down the right and the left wing respectively.

Meanwhile, Anirudh Thapa and Pronay Halder will pull the strings in the midfield, trying to ensure India has the midfield leverage. Pritam Kotal, Sandesh Jhingan, Narayan Das, and Subhashish Bose will complete the back four whereas Gurpreet Singh Sandhu is expected to thwart the Jordanian attacks from under the crossbar.

Jordan, on the other hand, is expected to start with a 3-4-1-2 formation with Baha Faisal and Musa Al-Taamari spearheading the attack. Other notable names to watch out for the home side are center-back Yazeen Abo Al-Arab, midfielder Khalil Bani Attiah, and left winger Yaseen Al-Bakhit.

Most of the Jordan players in the squad play at the Jordanian Pro League with some of them plying their trade in the neighboring Saudi Pro League, Kuwaiti Premier League, and the Arabian Gulf League. Musa Al-Taamari is a regular in the Cypriot First Division club APOEL and even represented them in all the matches of their UEFA Champions League and UEFA Europa League qualifiers.

The magnitude of the game can be understood by the fact that the climate and playing style of Jordan would be similar to that of UAE and Bahrain, whom India would be facing at the 2019 AFC Asian Cup.

India has always struggled to find the back of the net without Sunil Chhetri and we don’t it to be any different this Saturday. Under their new coach, Jordan has only found the back of the net once, that too from a set piece. Although they would be having the home advantage, we expect Gurpreet Singh Sandhu’s heroics would ensure India would walk away with a clean sheet. Sportsindiashow predicts the game to end in a 0-0 draw.