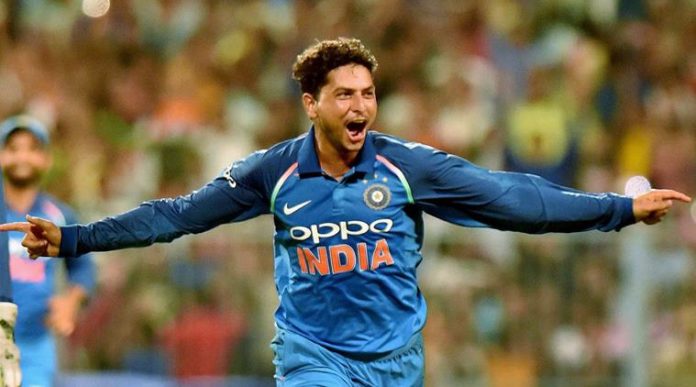 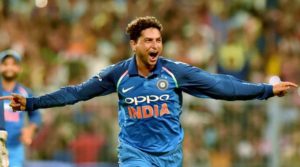 India’s chinaman bowler Kuldeep Yadav posted the best figures of his career to restrict England to 268. The left arm leg spinner picked up 6 wickets for 25 to get his first 5 wicket haul in ODIs.

England openers got their team of to a great start scoring 70 off the first 10 overs. Kuldeep then came on in the 11th over to pick up Jason Roy. He then followed up picking 2 more wickets in his next over.

After bowling some tight overs in the middle he again went on to pick Buttler and Stokes after they completed their fifties to claim his 5 wicket haul.

Twitter was buzzing with tweets following Kuldeep’s mammoth spell. Here are some of those tweets:

A dent at Trent with a different kind of a sixer today from @imkuldeep18. Simply brilliant bowling. #ENGvIND pic.twitter.com/gp14UzvZDI

Best ODI figures by a spinner in #ENG – ✅

He is the X-factor in the Indian team. Well bowled @imkuldeep18 for the 6 wickets. This bowler is special very very special. What do you think @VVSLaxman281 bhai ❤️ #ENGvIND pic.twitter.com/9yxagR7eXP

After 38 overs, England were 195/4 & Jos Buttler was looking dangerous. Such was @imkuldeep18 's impact with his wickets, Eng could score only 21 runs , lost 3 wkts in the next 7 overs. Best wishes to India to chase 269#EngvInd

#KuldeepYadav takes career-best 6-25. If he keeps rolling his wrist as fluently as he did today, #India have a greater chance of finishing the tour on a record high. #England fails to reach 300 despite a good start. India need 269 to win. #ENGvIND #eng pic.twitter.com/utplW1MXDK