India and England lock horns in the 3rd and the final IT20 to take place at Bristol today. With the series tied at 1-1 the winner of today’s match will take home the T20 series title. 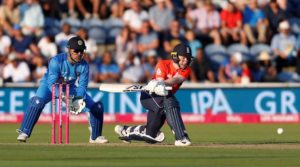 India won the first match comprehensively after Kuldeep picked up 5 wickets and KL Rahul notched up a century. The following match was a closely contested one in which the hosts came victorious in the last over following Alex Hales’ match winning 56*.

With the series tied 1-1, today’s winner will win the T20 series. India’s hopes will be pinned on their openers to give a good start who failed to do so in the second match. Also they will look for some contribution from their wrist spinners. Team wise they are expected to remain unchanged.

England on the other hand bounced back from the first T20 defeat by bowling well. They will want their bowlers to continue with the same form. England will also be looking to rope in Ben Stokes into the setup after his blistering knock in the T20 blast.

Here are the probable teams for the match:

The match is set to begin at 6.30pm IST with telecast on Sony Six and Sony Six HD.