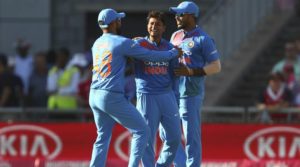 Following their emphatic win vs the hosts on Tuesday in Manchester, India take on England in the 2nd T20 today at Cardiff.

A win for India today will see them take the T20 series. England on the other hand will be looking to bounce back from defeat and post a win in order to keep the final match interesting.

India will come into the match in high confidence after beating the hosts comprehensively with Kuldeep picking 5 wickets and KL Rahul scoring a century.

They are likely to go unchanged into the match keeping their winning formula intact.

England on the other hand will once again be highly rely on their openers to give a flying start. They are expected to make changes to their bowling attack that got exposed in Manchester.

Here are the probable lineups for the match:

The match is set to start at 10pm IST with telecast on Sony Six and Sony Six HD.

Cricket: Anderson to rehabilitate his injured shoulder ahead of India test series

Why Pujara, Rahane are still key for India?