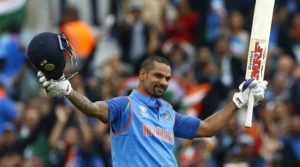 In the summer of 2013 a new look opening pair of Rohit Sharma and Shikhar Dhawan set out to bat for India in the Champions Trophy. 5 years on, the pair has grown immensely in confidence and at the same time contributing to majority of India’s wins.

With the start of the England tour, Dhawan and Rohit once again set to open the innings chasing a target of 159 put on by the hosts.

Even though they failed to score big yesterday, India cruised to victory following a blistering century from KL Rahul.

Great win last nite 👌🏼👌🏼Bus journey starts for Cardiff with team and my beautiful daughters by my side. Cannot ask for anymore, my strength gets double #Aliyah Dhawan #Rhea Dhawan 😍😍😘😘😘. Hello there @ImRo45 😋 pic.twitter.com/OvYht63djN

The post shows Dhawan along with his daughters and opening partner Rohit Sharma travelling to Cardiff as they get ready to face England in the second IT20 which is set to take place on Friday.

Cricket: A dream come true for the Pandya Brothers!