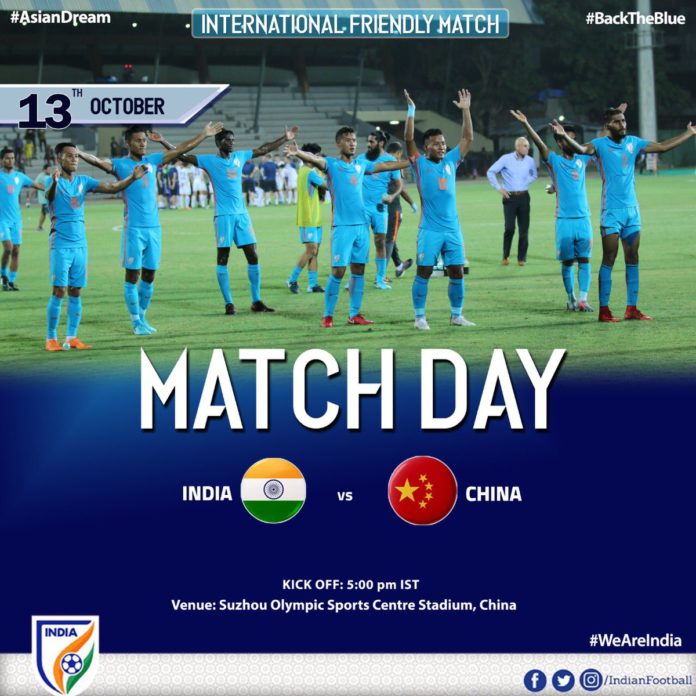 India will lock horns with the Asian giants China on 13th October at 5:05 p.m. IST in the Suzhou Olympic Sports Centre. Stephen Constantine has named Sandesh Jhingan as the captain of the side, thus relieving Sunil Chhetri of the captaincy role and allowing him to focus more on his striking abilities.

The Red Dragons are coming off a 1-0 draw against Qatar and a 0-0 draw against Bahrain, and their coach Marcelo Lippi would like to put away the abysmal striking form the team has been plagued with recently.

India are expected to line-up with a 4-4-2 formation with Sunil Chhetri and Jeje Lalpekhlua leading the pack. Udanta Singh is the favorite to sprint down the right wing, but the left wing position would see a tough competition between Ashique Kuruniyan and Holicharan Narzary to start the game.

Meanwhile, the onus will be on Anirudh Thapa and Rowlin Borges to control the pace of the game and ensure India dominate the midfield proceedings. The back four is likely to comprise of Pritam Kotal, Sandesh Jhingan, Anas Edathodika, and Subhashish Bose whereas Gurpreet Singh Sandhu is expected to thwart the Chinese attacks from under the crossbar.

China, too, are expected to start with a 4-4-2 formation with Guangzhou Evergrande’s Gao Lin and Shanghai SIPG’s Wu Lei spearheading the attack. Other notable names to watch out for the Red Dragons are left-back Yu Hai, midfielder Zheng Zhi who is coming out of his retirement, and goalkeeper Zeng Cheng.

All the Chinese players in the squad play at the Chinese Super League whose level is way above the Indian Super League where all the Indian players, excepting Salam Ranjan Singh, ply their trade. However, the players haven’t been able to replicate their performance in the national side. On the other hand, the Indian senior team has been abysmal away from home, and Constantine’s complaints of not having enough preparation time could haunt them.

Despite China being billed as the favorites for the match, we predict that Sandesh Jhingan, Anas Edathodika, and Gurpreet Singh Sandhu will hold their ground firm and not leak more than one goal. On the other hand, more than 50% percent of the goals from the Indian team has come from the dreaded duo of Sunil Chhetri and Jeje Lalpekhlua, and we predict that the will find the back of the net again tomorrow. Sportsindiashow predicts the game to end in a 1-1 draw.