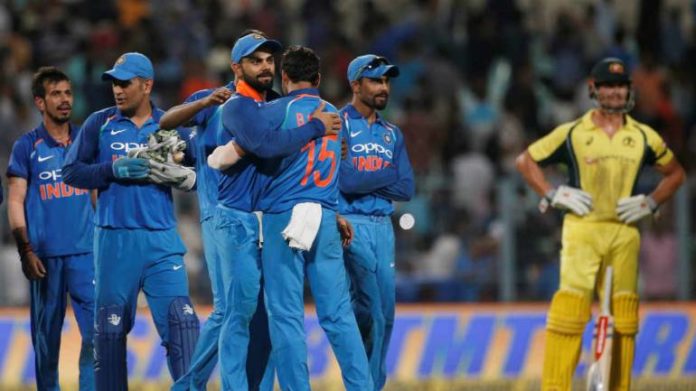 After registering an emphatic win in the first ODI at Hyderabad, India will look to continue the momentum when they take on Australia in the second ODI in Nagpur. Following the T20I series loss, the Virat Kohli led- team ticked all the boxes to thrash Australia by six wickets in the series opener on Saturday. The team chased down a moderate total of 237, thanks to the efforts of MS Dhoni and Kedar Jadhav both of who struck 50s and were involved in a mammoth 141-run fifth wicket stand.

The two teams are still looking to fix their squads for the ICC World Cup and Nagpur could witness a heavily rotated playing XI from both the sides.

India could look to give KL Rahul a go at top of the order replacing Shikhar Dhawan who did not get runs in the first face-off. In the bowling department, Kuldeep Yadav is expected to retain his place in the XI, having snapped up two wickets for 46 in the first match. There could be a flip between Ravindra Jadeja and Yuzvendra Chahal for the second spinner’s spot.  The Indian team management may also look to give Rishabh Pant a chance and the flamboyant batsman could replace Ambati Rayadu at number 4. Other selections are straightforward.

In the opposite camp, Aaron  Finch, who had scores of 0 and 8 in the T20 series, continued his bad run in the first ODI, will be hoping to get some runs under his belt on Tuesday . Shaun Marsh, who has arguably been Australia’s most consistent ODI performer post the ball tampering scandal could walk in the XI in to replace Ashton Turner. Zampa’s show at Hyderabad would keep Nathan Lyon out. Australia could bring in Andrew Tye to support Zampa, ahead of Jason Behrendoff.