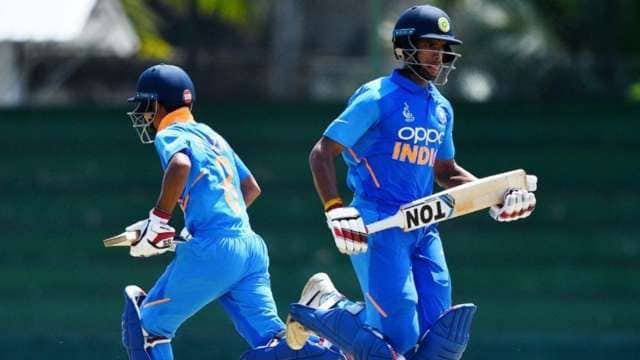 India U19 team have started the U19 World Cup on a high after defeating neighbors Sri Lanka comprehensively in their first game at Mangaug Oval in Bloemfontein.

Both the openers put up a partnership of 66 for the opening wicket after Saxena gave away his wicket to Amshi de Silva. 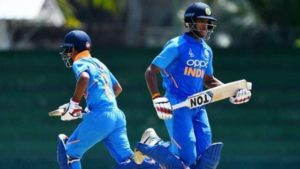 Yashasvi Jaiswal who has taken the domestic circuit by a storm scored a well compiled fifty and stitched the innings quite well for the Indian team.  He went on to make a good partnership with Tilak Verma who scored 46 before getting stumped to Ashian Daniel. Yashasvi Jaiswal got out for 59 to Dilshan Madushanka.

Captain Priyam Garg, Vice-Captain Dhruv Cand Jurel and batsman Siddhesh Veer all scored at a fast pace as Priyam Garg and Dhruv Jurel scored fifties and Veer scored a quick fire 44 off 27 balls. It helped India reach a total of 297 at the end of 50 overs.

In reply the Indian pace trio of Shushant Mishra , Akash Singh and Kartik Tyagi did their very well as all the three pacers generated pace and bounce from the pitch.

To everyone’s surprise Ranchi born Shushant Mishra extracted extreme pace from the pitch and was finding the outside edge of the bat quite often putting Sri Lanka into problem.

Batting hero Siddhesh Veer and Ravi Bishnoi spun a sin web around the islanders as both of them took a couple of wickets to rap the game for India.

In addition part-time bowlers Yashasvi Jaiswal, Tilak Verma and Shubhang Hegde controlled the flow of the runs when given the ball, with Jaiswal also taking a wicket to put the icing on the cake.

Siddhesh Veer was adjudged the Man-of-the-Match for his superb All Round performance as the all-rounder scored 44 of 27 balls and also took 2 wickets conceding 34 runs in Six Overs.

With this victory against Sri Lanka India have sent a strong message to all the other teams in the world cup asking them to be vary of the fire power this team posses.

India will next face Japan on 21st January in Bloemfontein and New Zealand on 24th on the same ground.