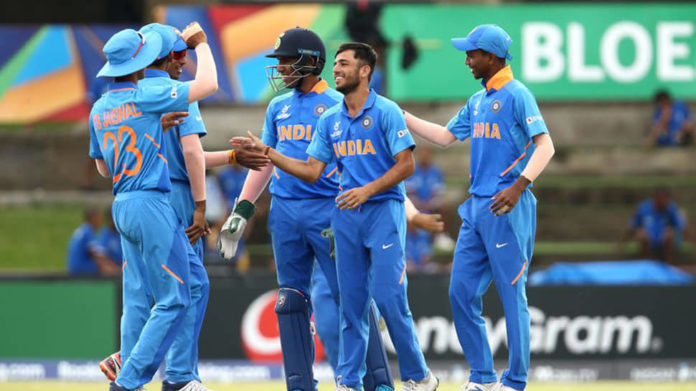 The Indian U19 team is riding high on confidence after defending champions India defeated New Zealand by 44 runs in a rain affected game in Bloemfontein.

New Zealand skipper Jesse Tashkoff won the toss and invited India to bat first. Indian captain was happy with the toss and made three changes to the team as Divyansh Saxena, Sushant Mishra and Atharva Ankolekar made a comeback to the team.

India openers Divyansh Saxena and Yashasvi Jiaswal started the innings cautiously and played with the merit of the ball and stitched a brilliant partnership until thunderstorms and lightning arrived.

In the 21st over lightning was seen around the ground and the umpires decided to call off the game which was then accompanied with a heavy rain which continued for sometime. 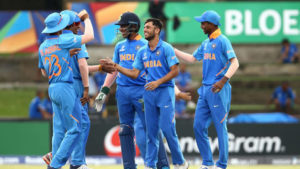 Both Jaiswal and Saxena were looking flawless as both batsmen completed their half-centuries and remained unbeaten in the shortened game. Both the openers looked stable and valued their wickets and didn’t play any rash shots.

India finished at 115 for no loss at the end of 23 overs giving New Zealand a target of 192 as per Duckworth-Lewis method.

Coming to bat New Zealand started off their innings aggressively and pt pressure on both Sushant Mishra and Kartik Tyagi. Openers Rhys Mariu and Ollie White started off aggressively before leg spinner Ravi Bishnoi took the important wicket and put breaks on the kiwi innings in the fifth over.

It was then Fergus Lellman who took Atharva Ankolekar to the cleaners as the right hand bat welcomed Ankolkear with two consecutive sixes.

It was then Ankolekar who used his wit and experience to account for both the set batsman as the kiwis slumped to 99 for 3 in 11 overs.

It was then the exploits of Ravi Bishnoi and pacers Sushant Mishra and Kartik Tyagi who put pressure on the Kiwis batting as the Kiwis crumbled for 147 in 21 overs losing the game by 44 runs.

Ravi Bishnoi took four wickets and was complemented by Atharva Ankolekar who took three important wickets and then the finishing touch was given by pacers Sushant Mishra and Kartik Tyagi.

India topped the group stages after the win over New Zealand and remained unbeaten in Group A. The Indian comprehensively defeated Sri Lanka, Japan and New Zealand.

India will now face Australia in the first Quarter-finals on 28th January at Potchesfstroom. India will like to continue their form in the Quarter-finals and would like to win the tournament for the record 5th time and defend their title which they won in New Zealand in 2018 under the leadership of Prithvi Shaw.