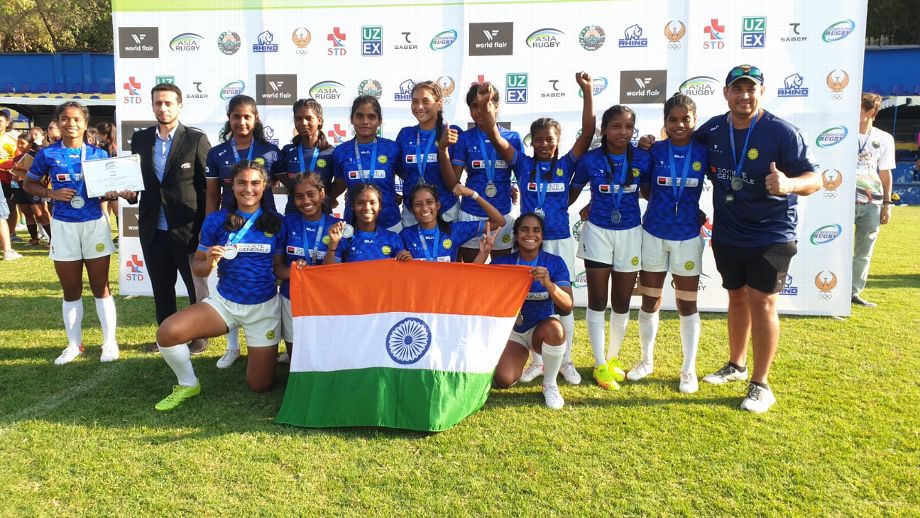 At the U-18 U-18 Asia Rugby Sevens championship, chances for India to win was pretty slim considering how tiny the girls in the India Rugby team looked compared to their opponents. The squad comprised of barely sixteen or seventeen year olds had not played much of contact rugby before. They didn’t have the experience, their opponents had, but the girls surprised everyone even their coach Ludwiche Van Deventer when they made points after points, only lost by conversion and brought home silver.

To celebrate their win, the Odisha government, Rugby India and another supporting partner, announced that they would be offering a total of 15 lakhs in cash rewards to the team and the coaches.

Sports Minister, Tusharkanti Behara and President of the rugby team,Vikram Ahuja is hopeful that sponsorship and the cash rewards will help in promoting the sport and nurturing new talent.

“The first time we got onto the field, the girls’ nerves were shot.”

Let alone playing on an international level, the girls had never been on a plane before! They were to face UAE, Kazakhstan, Kyrgyzstan and Uzbekistan. The sheer difference between the sizes of the playes worried the team.

“The first time we got onto the field for our match against Kazakhstan, the girls’ nerves were shot, just looking at their opponents’ physical size. If I was told then that we would get the silver in a final that saw three tries each and losing only conversions, I’d happily take it.”

Before games were to commence, some six six weeks earlier, Ludwiche was still on the hunt looking for talents that can represent the nation at the national level. He found 52 possible rugby players but the squad only had 14 seats. He took his fair time to select the players and train them, the result is a silver trophy.

The girls were taken on a tour of the city in a private bus, and filled their stomach in the Indian restaurants. Earlier Rugby players experienced culinary shocks whenever they travelled to another country. The players would be forced to survive on fruits and breads to satisfy their hungry stomachs!