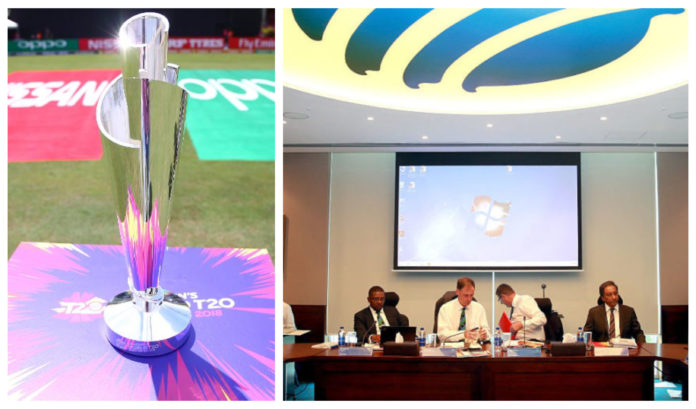 International Business Corporation (A commercial subsidiary of the ICC) convened to determine the fate of the upcoming ICC tournaments. The ICC declared that the 2021 T20 World Cup would be held in India as originally planned, while Australia will host the tournament in 2022 instead of 2020.

Apart from these tournaments, it was also decided that the 2021 Women’s World Cup slated to be held in New Zealand next year from February to March will be shifted to the same window in 2022.

The ICC had already announced the postponement of the 2020 edition of the T20 World Cup to the coronavirus pandemic. After the meeting, all of the upcoming major men’s edition of ICC events would be held in the October-November window.

As far as the qualification picture for tournaments is concerned, the teams who have already qualified for the cancelled 2020 edition will automatically secure their berths for the 2021 edition. A separate qualification process will be held for the 2022 T20 World Cup and the 2023 Cricket World Cup.

Whereas, the women’s World Cup which already saw five teams qualified, the rest of the slots were to be determined through a separate qualification competition. The competition was slated to be held in Sri Lanka but was impacted due to the pandemic. The ICC have decided that the particular tournament to determine the three last spots would be held in 2021 with the dates yet to be revealed.

ICC Chief Executive Manu Sawhney claimed that there is clear clarity as to the direction in which the ICC events are headed towards. He said:

“We now have absolute clarity on the future of ICC events enabling all of our Members to focus on the rescheduling of lost international and domestic cricket. We will now proceed as planned with the Men’s T20 World Cup 2021 in India and host the 2022 edition in Australia,”

“We have taken the decision to move the ICC Women’s Cricket World Cup to give players from every competing nation, the best opportunity to be ready for the world’s biggest stage and there is still a global qualifier to complete to decide the final three teams,”

The significance of Cheteshwar Pujara