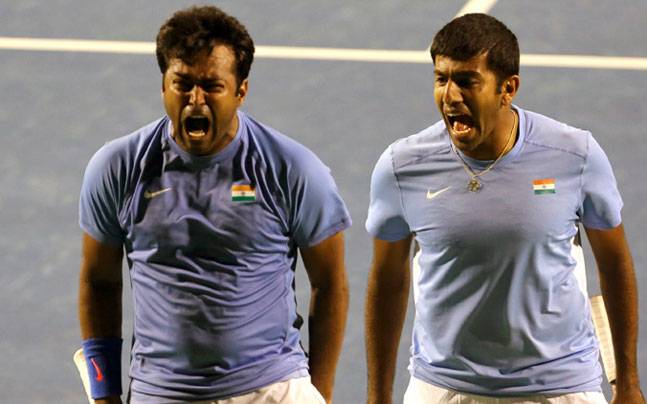 The selection committee of All India Tennis Association (AITA), announced an eight-member squad for the hugely anticipated fixture against Pakistan in Davis Cup, on Thursday. Veteran Leander Paes has returned to the squad after 18 months, while young Sumit Nagal, Ramkumar Ramanathan, with doubles star Rohan Bopanna, have been called up. The Asia Oceania Group I tie, was scheduled to take place in Pakistan, but following a security assessment, the International Tennis Federation, concluded that it would be unsafe for India to travel there.

The AITA in a first, picked as many as eight players for the upcoming clash. Sumit Nagal, ranked 127 in the recent ATP chart has been picked most likely for two singles matches. Along with him, Ram Kumar Ramanathan, Sasikumar Mukund, Saketh Myneni, Siddarth Rawat, Paes, Rohan Bopanna and Jeevan Nedunchezhiyan have also made the cut.

Ram Kumar currently stands on the 190th position of the ATP rankings while, Sasikumar is at 250. The latter reached the Finals of the International Challenger Baotou event in China earlier this year and has been rewarded for his consistent performances in 2019.

Siddarth Rawat took home his maiden ITF men’s Future’s tennis tournament in June this year and is ranked 517, while Jeevan and Rohan Bopanna have paired up despite the presence of Leander Paes.

Speaking of Paes; the inclusion comes as a surprise, with the now 46-year old in the twilight of his career. With the lack of form, the legendary tennis star was excluded from the top-100 for the first time since 2000 last week. However, one cannot deny his experience when Davis Cup comes around and it’d be interesting to see whether the team chooses him with Bopanna instead of Jeevan and Bopanna against Pakistan.

Rohit Sharma gears up for the upcoming England series after a three-week break.