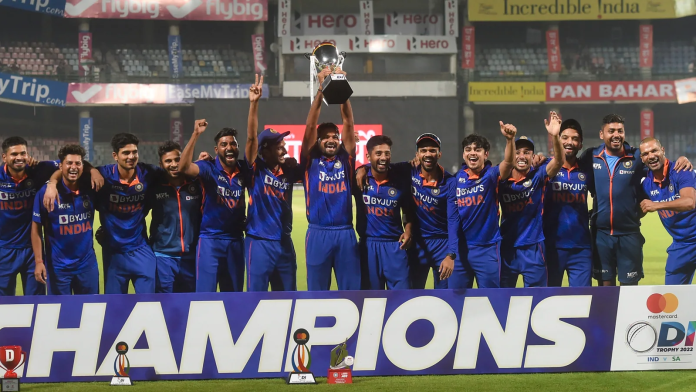 India defeated South Africa by seven wickets in the third and final One-Day International (ODI) on Tuesday at the Arun Jaitley Stadium in New Delhi, clinching the three-match series 2-1. With their thrashing of the Proteas, India also equaled Australia’s 19-year-old record.

India tied Australia’s record for most victories by a team in an international cricket calendar year. In 2003, Australia set a record by winning 38 matches, including the ODI World Cup. Since then, no team has come close to matching the Australians’ achievement.

However, after defeating South Africa on Tuesday, India equaled Australia’s record with their 38th win in international cricket this year. India will have numerous opportunities to break the record when they play in the forthcoming T20 World Cup in 2022.

In terms of the game, India won the toss and chose to bowl first in the series finale in New Delhi. The bowlers united to run riot against the Proteas, dismissing the visitors for 99 in just 28 overs. Heinrich Klaasen led South Africa in scoring with 34 off 42 balls, but the rest of the team failed to score.

Mohammed Siraj maintained his excellent form with the new ball, dismissing opener Janneman Malan for 15 runs off 27 balls before dismissing Reeza Hendricks for 3 runs off 21 deliveries. He was ably assisted by spinners Washington Sundar and Shahbaz Ahmed, who both took two wickets as South Africa’s middle order disintegrated.

Kuldeep Yadav then raced through the tail to take up a four-wicket haul and dismiss the visitors for 99 runs. India won comfortably and clinched the series 2-1 after chasing down the mark in 19.1 overs thanks to Shubman Gill’s 49 off 57 balls.

The Men in Blue tied the record for most international wins in a calendar year and will look to surpass Australia when they face arch-rivals Pakistan in the opening match of the forthcoming T20 World Cup 2022 on October 23. With just over a week to go before the anticipated clash, check out https://yourcasinos.in/online-casinos/crickex/refer-code/ to see how you can obtain and use a casino referral code to bet on upcoming cricket matches.

Following India’s remarkable seven-wicket series-leveling triumph in the second and penultimate match at Ranchi on Sunday, both teams approached the series finale with everything to play for. David Miller captained the side for the first time in ODIs, with regular leader Temba Bavuma and vice-captain Keshav Maharaj both missing. However, the power- hitter’s first match as ODI skipper did not go well, as the Proteas were bowled out for 99 in 27.1 overs.

India won the toss and chose to bowl first, relying on strong opening spells from Md Siraj and Avesh Khan. While Siraj dismissed Janneman Malan and Reeza Hendricks, Washington Sundar dismissed Quinton de Kock and captain Miller. Kuldeep Yadav then wrecked havoc by removing the lower order in quick succession, finishing with match stats of 4 for 18 in 4.1 overs. As a consequence, South Africa surrendered for their fourth-lowest ODI score. This is also their lowest total versus the Men in Blue.