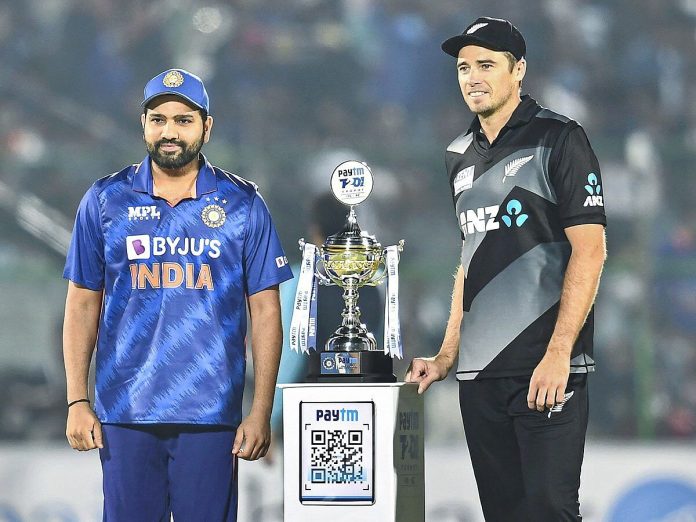 On backdrop of a dreadful World Cup T20 campaign, India started the Rohit-Dravid era with a clinical 5-wicket victory over New Zealand in the first T20I between the two sides. Even though New Zealand posted a total of 164/6 on the board, the ‘Men in Blue’ chased down the target with 2 deliveries to spare.

In the absence of skipper Kane Williamson, the task was going to be always a tricky one for the visitors. For them, World Cup hero, Daryl Mitchell was dismissed for a duck in the 1st T20I. However, opener Martin Guptill and left-hander Mark Champan put on a superb 109-run partnership for the second wicket to help the Kiwis to a decent total.

Chapman was promoted to the No.3 slot in the absence of Kane Williamson, and he made that opportunity count with a superb 63. Guptill was at his best and creamed a classy 70 off just 42 deliveries.

After the debacle in the desert, India team needed wholesale changes. Suryakumar Yadav stood up with the willow for the home side. At a time when there is so much competition for a spot in the Indian team, Yadav walked in at No.3 and scored a match-winning 62 to propel India to victory. Rohit Sharma too played an important knock in his 1st T20I as full-time skipper and helped himself to a flawless 48.

With just a one-day gap between the first and second rubbers, New Zealand do not have much time to recover and regroup. A loss in the 2nd T20I will mean that the Kiwis will surrender the series. On the other hand, India will look to land the knockout blow and take an unassailable 2-0 lead in the three-match rubber.

Only 2 T20Is have been held in this venue so far. Batters will surely get value for their shots on this surface. The wicket will also offer some turn for the spinners as well.

The hosts can take many positives from the first match in Jaipur. Apart from Sharma’s stroke-filled 48 and Ravichandran Ashwin’s 2/23, Suryakumar Yadav made great use of the opportunity of batting at number three with a solid 62 off 40 balls while Bhuvneshwar Kumar did well in picking 2/24 in his four overs. 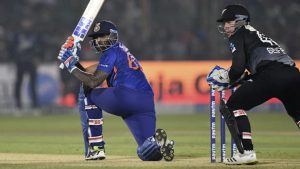 Bhuvneshwar Kumar has been out of the team recently, and his return to form will please the management. Suryakumar Yadav continued batting in an uninhibited manner and picked up the Player-of-the-Match award, while Rohit, too, batted freely. India, though, would want more from their middle order.

Mohammed Siraj split his webbing in his left hand, and might not take the field for India in the second match. Harshal Patel or Avesh Khan will replace him. The rest of the line up will remain the same.

Rishabh Pant’s reputation is of a destructive middle-order batter. But in 2021, he has struck at a middling 124.68 in eight T20I innings. Surprisingly, that is still higher than his overall strike rate (122.62) in the format. With Suryakumar all but cementing his slot, KL Rahul available as an alternative wicketkeeper and Ishan Kishan also being in the squad, Pant’s performances will be under scrutiny.