A bowling attack led by Jasprit Bumrah helped India thrash Sri Lanka by 238 runs at Bangalore’s pink-ball Test inside three days on Monday. With the win, Team India climbed to fourth spot in the updated World Test Championship (WTC) points table after registering a 2-0 series whitewash over Sri Lanka at home.
Now, apart from impressive performances by the likes of Jasprit Bumrah, Ravichandran Ashwin, Ravindra Jadeja and Rishabh Pant, the series win was also important for Team India for WTC points as well.
Interestingly, India now have won all three pink-ball Tests at home, having beaten Bangladesh (in Kolkata, 2019) and England (in Ahmedabad, 2021) before.
India, who were earlier at the fifth spot, are now placed fourth on the points-table with a win percentage of 58.33. Australia, who are favourites to win the Karachi Test, hold the top spot, followed by Pakistan and South Africa at second and third respectively. Sri Lanka, on the other hand, are below India with a win percentage of 50.
With a Point Percentage of 58.33, Team India went past Sri Lanka who now stand fifth on the points table. The top four teams are Australia (77.77%), Pakistan (66.66%) and South Africa (60.00%), respectively.
Meanwhile, West Indies slipped to eighth behind Bangladesh as two points were docked for slow over-rate during their drawn first Test against England in Antigua. The Kraigg Brathwaite-led side were found to have been two overs short after reasonable adjustments and time allowances had been taken into consideration, the ICC said. 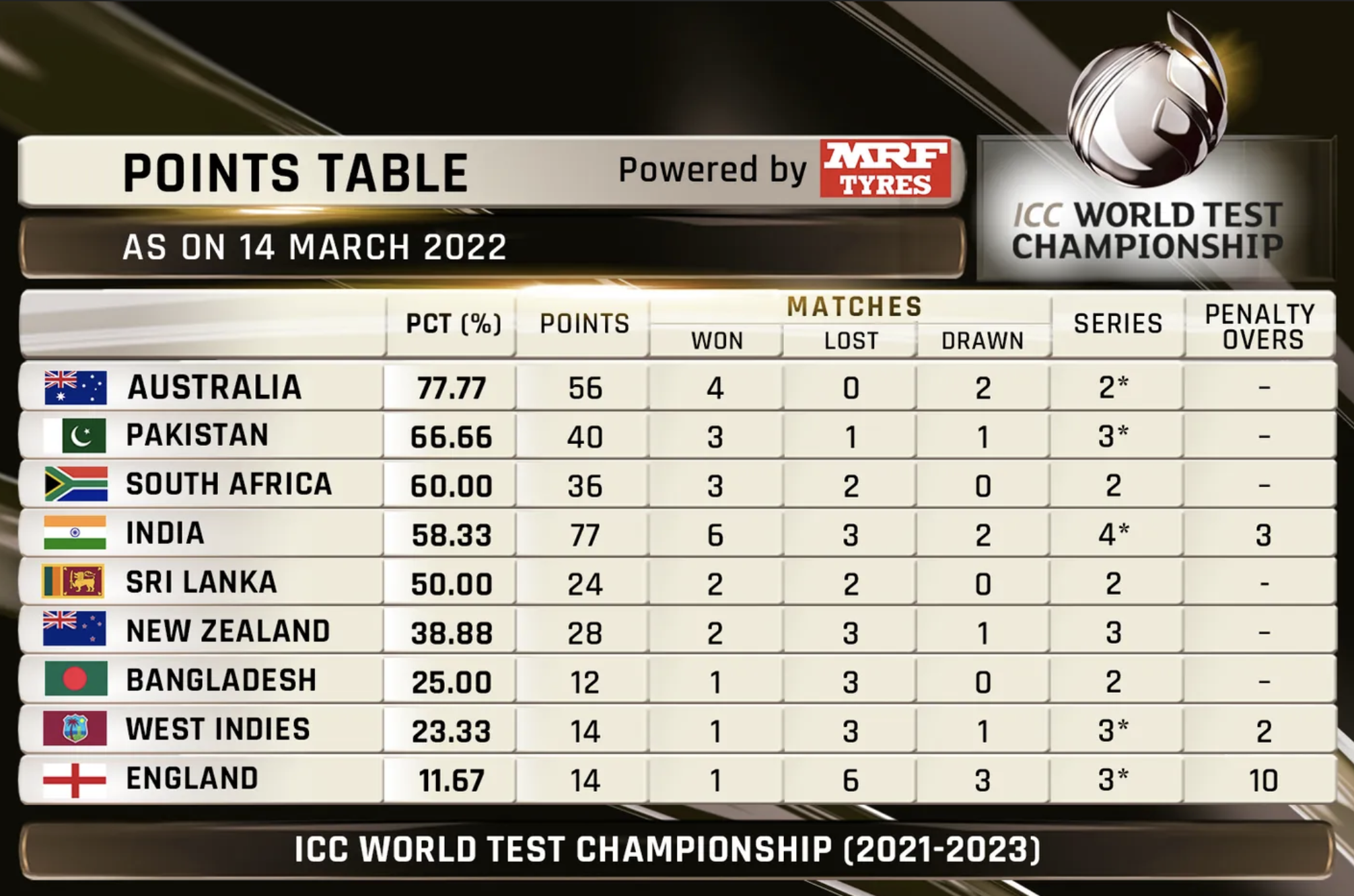 Team India’s chances of making it to the second successive WTC final were dealt a huge blow as they went down to South Africa in a 3-Test series.
That 2-1 loss means India can ill afford to slip up in the remaining seven Tests it plays at the World Test Championship.
Rohit Sharma and Co’s next WTC assignment is a one-off Test against England at Edgbaston from July 1-5.
The team then travels to neighbours Bangladesh where they play 2 Test matches in November, followed by a 4-match Test series at home against Australia. India had lost to New Zealand in the inaugural WTC final in 2021, played at the Rose Bowl in Southampton.
In order to match that, the team needs to win the majority of the remaining matches, and hope other results follow their way. In the recently concluded series against Sri Lanka, the Indian team came mighty close to face a point deduction penalty.
As per the WTC playing conditions, a side will be penalised one WTC point and fined 20 per cent of their match fees for every over they have failed to bowl in the allotted time. The top two teams at the end of the Test cricket cycle in 2023 will be contesting the final at Lord’s cricket ground in 2024. Rohit and Co would hope to make that trip, and their race against time starts now!