Debutants Simranjit Kaur, Lovlina Borgohian, and Sonia ensured that India was guaranteed at least four medals at the ongoing World Women’s Boxing Championships in New Delhi. Mary Kom had earlier assured India of a bronze medal after she qualified to the semi-finals in the 48kg category yesterday. 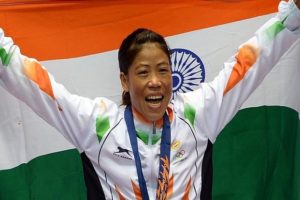 In the 57kg category, Sonia ensured her of a bronze medal after a controversial 4-1 win over Colombia’s Yeni Castenada. She will now face 2018 Asian Games silver medallist, the North Korean Son Hwa Jo.

Simranjeet Kaur further strengthened India’s prospects of winning gold at the event as she overwhelmed Ireland’s Amy Broadhurst 3-1 in the light welterweight category.

The entire day was not bright for the Indian contingent as Pinki Rani, Manisha Maun, Bhagyabati Kachari, and Seema Poonia’s journey at the event called for the curtains today.

Mary Kom and Lovlina Borgohain’s semi-finals bout will be on the 22nd November after 4:00 p.m The viewers can catch the live streaming on www.eubcboxing.org. On the other hand, Sonia and Simranjeet will be raring at the semi-finals the day later.