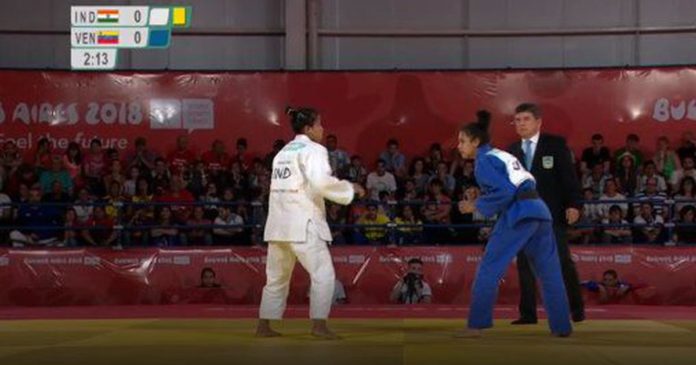 Tababi Devi Thangjam etched her name into the history books after she became the first Indian judoka to win a medal at the 2018 Youth Olympics. The Manipuri lost 0-11 to Venezuela’s Maria Giminez in the final of the Women’s’ 44kg event but clinched a silver medal in the process.

On her route to the final, Tababi Devi defeated Bhutan’s Yangchen Wangmo 10-0 in the Round of 16, overcame Kosovo’s Erza Muminoviq in the quarterfinals, and got the better of Croatia’s Ana Viktorija Puljiz 10-0 in the semifinals to make it to the summit clash.

The 16-year-old shot into the limelight at the sub-junior national judo championships in Bihar in 2016 by winning gold. Tababi’s tryst with winning medals wouldn’t end there as she would win the yellow metal in Kyrgyzstan at the 2017 Asian Cadet Championship and become the junior and cadet champion in Jalandhar at this year’s nationals.

She continued adding more gold medals at her collection after winning the Asian Cadet Championships in May this year and clinching gold at the Cadet Asian Cup in Kazakhstan which would confirm her participation for the Youth Olympics.

We here at Sportsindiashow wishes Tababi Devi best of luck for her future endeavors.