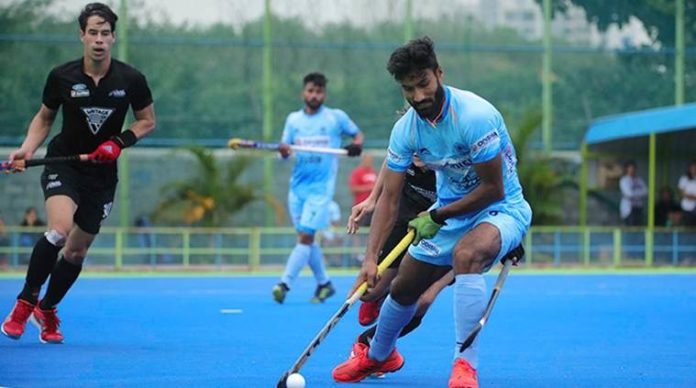 India continued their undefeated streak by defeating Japan 3-2 in the semi-finals of the 2018 Asian Men’s Hockey Champions Trophy at the Sultan Qaboos Sports Complex in Muscat on Saturday. Earlier in the day, Pakistan made their way to the finals after overcoming Malaysia 3-1 on penalties following a 4-4 regulation time scoreline.

India began the game with all guns blazing and was rewarded a penalty-corner at the 2nd minute itself. However, Harmanpreet Singh dragged his shot wide. The Men in Blue totally dominated the first quarter but Japan’s resolute defending and their goalkeeper’s heroics ensured the scoreline remained intact.

India’s marauding runs finally paid off when Gurjant Singh’s thunderous strike gave India the lead at the 17th minute. However, the joy was short lived as Wakaru equalize five minutes later following a diving deflection off a penalty corner.

Unlike the first two quarters, the third quarter didn’t have much goalscoring opportunities for both the sides. But, Chinglensana again put India in the front foot at the 44th minute after his deflection off a penalty corner found the back of the net. Japan’s staunch defending finally gave in at the 55th-minute when they failed to fend off Dilpreet Singh’s solo run which resulted in a goal.

Japan reduced the deficit three minutes later as Zendana scored from a penalty corner. But, it proved to be too little too late as the scoreline read 3-2 in India’s favor at the final whistle.