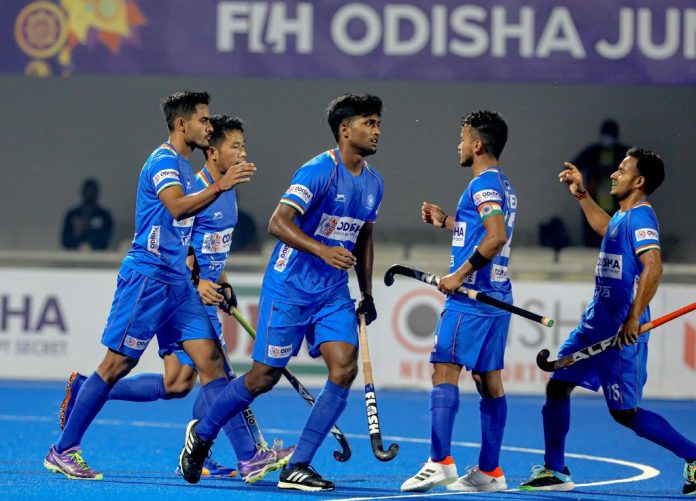 India needed to win the Pool A contest by at least a 15-0 margin to qualify and the young players of the side delivered under pressure.
Both India and Pakistan finished on four points each in Pool A behind Japan but the defending champions qualified for the Super 4s due to better goal difference (1). Pakistan had lost 2-3 to Japan earlier in the day. The result not only pushed Pakistan out of the tournament but also dashed their hopes of World Cup qualification since only the top three teams here will be given tickets for the big event.
India, being the hosts, will play the World Cup later in the year and hence Hockey India decided to send young players to this tournament for exposure. Dipsan Tirkey (5 goals) and Sudev Belimagga (3 goal) shared eight goals between them, playing a key role in team’s crucial win. Veteran SV Sunil, Pawan Rajbhar and Karthi Selvam scored a brace each while Uttam Singh and Nilam Sanjeep Xess were the other goal getters for India.
With odds stacked against them, India started on an attacking note and had the first shy at the goal in the seventh minute but Uttam Singh, who had only the goalkeeper to beat, pushed wide Maninder Singh’s feed . In the 10th minute, Rajbhar broke the shackles with a powerful shot from top of the circle. Rajbhar doubled India’s lead a minute later through a rebound from the team’s first penalty corner. A minute from the first quarter, India extended their lead through Uttam, who was at the right place at the right time to tap home. India continued their attacking instinct and secured another penalty corner in the 19th minute from which Sunil scored after they recovered from a miss-stop. A minute later, the Indians earned back-to-back penalty corners, the second of which was converted by Nilam Sanjeep Xess to make the scoreline 5-0.
In the 24th minute, Sunil deflected in Karthi Selvam’s pass from near post to make it 6-0. After the change of ends, Uttam missed yet another chance as she shot wide from close range with only the Indonesian goalie to beat. Minutes later, India secured their seventh penalty corner but Junius Rumaropen made a double save once again. In the 40th minute, Selvam tapped in after he was set by a brilliant Rajbhar, who dodged past three-four Indonesian defenders with his stickwork and strong play. India secured three consecutive penalty corners and Dipsan scored from the last to keep the team’s hopes alive. Dipsan scored his second from the penalty stroke in the 42nd minute.
The Indians managed two more penalty corners but on both the occasion Dipsan faltered. Belimagga then scored two goals in a span of two minutes before Dipsan completed his hat-trick by converting India’s 14th penalty corner to make the scoreline 12-0. The Indians earned a handful of penalty corners thereafter but the chances went begging. Tirkey then converted a penalty corner in the 47th minute before Sudev scored from a rebound from another set-piece, five minutes from the hooter.
Desperate for goals, the Indians attacked with numbers and their ploy bore fruit when Karthi Selvam scored from a field effort. Tirkey converted two more penalty corners in the final minute of the game to extend India’s stay in the tournament.