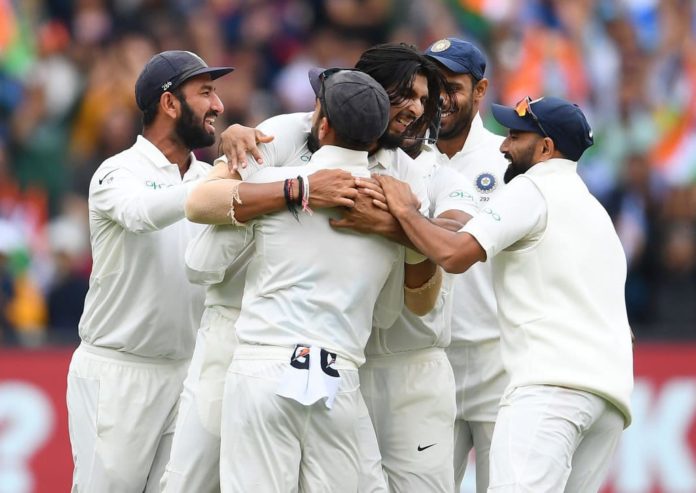 Following the rains that washed out the entire first session, India bundled out Australia in less then 5 overs to take a 2-1 lead in the series. 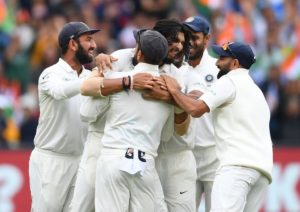 India went on to beat Australia for the first time in 37 years at MCG as they took a 2-1 lead in the four-match Test series. The visitors, who needed to pick up 2 wickets to wrap up the game had their nervous moments as the first session of Day 5 was washed out. Then it took less than five overs in the second session for India to take the final two wickets.

Pat Cummins and Nathan Lyon frustrated the Indians right from yesterday and hung in to push the game into the final day. The 4th over of today’s play saw Jasprit Bumrah remove Cummins, who was caught by Pujara in the first slip. He then walked off to a standing ovation from the MCG crowd having made 63 off 114 balls.

Ishant Sharma then picked up the final wicket dismissing Nathan Lyon in the very next over to spark erratic celebrations from the Indians.

The match saw India dominate right from day 1 with the hosts showing very less dominance. Winning the toss and electing to bat first, Virat’s men took control of the game right from the word go. Mayank Agarwal rightfully proved his inclusion into the side after playing a gritty knock of 76. Another century from Pujara and significant contributions from Kohli and Rohit saw India post a mammoth 443 in the 1st innings.

With the pitch deteriorating after each day’s play, the visitors used it to their advantage and put pressure on the Aussies. The side that was weakened by absence of Smith and Warner found it difficult to match India’s pace trio and eventually crumbled for 151, handing them a 292 run lead. Bumrah stood out for India with figures of 6 for 33.

While it was expected that India would enforce the follow-on considering they had spent only 66 overs out on the field and with rain predicted for the next 2 days, Virat went on to surprise everyone by electing to bat again.

In their second outing though, the visitors crumbled, failing to handle the pace of Cummins. At the start of day 4, India were stationed at 54/5 with a lead of 346. It was the quick runs that were the priority for them.

Cummins took advantage of the situation and continued from where he left off on Day 4. He dismissed Agarwal for 42 and then followed it up with wickets of Jadeja. Cummins ended the innings with career-best figures of 6/27. Josh Hazlewood dismissal of Pant for 33 saw India declare the innings at 106/8 setting Australia a target of 399.

Jasprit Bumrah once again got India off to a fine start, removing the struggling Aaron Finch in his very first over of the day. Jadeja got Marcus Harris to expose Australia’s middle order. The incoming batsmen such as Khawaja, Shaun Marsh and Travis Head all got off to good starts but failed to convert them, thus leading to Australia’s downfall.

Marsh was part of the only partnership that went beyond the 50-run mark but couldn’t get to a 50 himself. Jasprit Bumrah was once again the man who got India the breakthrough.  His brother Mitchell too didn’t last long and soon made his way back to the pavilion.

As usual the Indians found their difficulties in dismissing the lower order pair. Paine and Cummins first showed some resistance which then followed up by the pair of Cummins and Starc.

Thus this win ensures that India will retain the Border-Gavaskar trophy even if they go on to lose the final game. But the main quest for India will be to win their first series Down Under. The 4th test begins on January 3rd in Sydney.