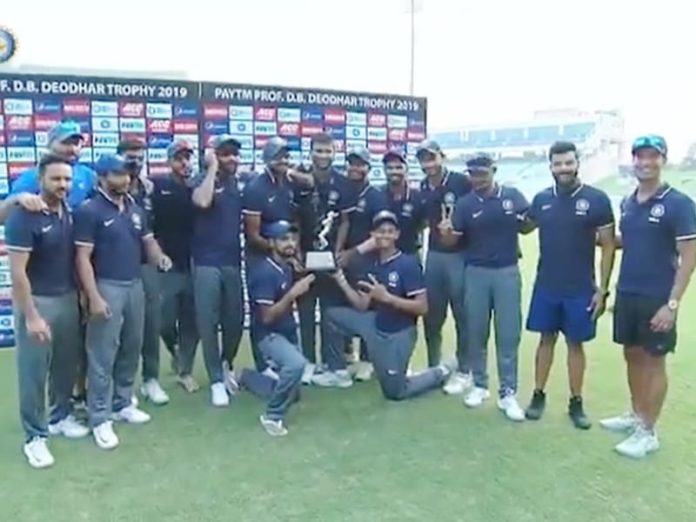 Parthiv Patel led-India B defeated India C in the finals of the Deodhar Trophy at Ranchi on Monday. Parthiv Patel won the toss at the JSCA International Stadium and elected to bat on a bright morning in Ranchi. Shubman Gill led India C were unbeaten in the group stages and had defeated the the former on Saturday by a considerable margin to gain the top spot in the three-team tournament. 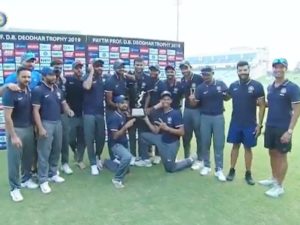 The U19 Fast bowler Ishan Porel started off very well as the Bengal bowler took Rituraj Gaikwad and captain Parthiv Patel as India B were reduced to 28/2 in the ninth over. Wickets at regular intervals and the spinners operating in tandem was creating problem for India B as the they were 92/4 in the 25th Over.

A spirited performance by Indian Internationals Kedar Jadhav and Vijay Shankar helped them get to a good score but a death-over blitz by the Karnataka All-Rounder Krishnappa Gowtham helped India B reach 283/7 in the allotted 50 overs. 17 year-old Yashasvi Jaiswal scored a composed 54 to start off the good things for the batting team.

India C lost captain Shubman Gill early in the chase as youngster Priyam Garg joined veteran Mayank Agarwal to savor the chase but fell quickly to the local lad Shabhaz Nadeem who was the hero of the match for the Parthiv Patel led India B.

Virat Singh who had a good outing in the previous game was run out by Gaikwad and thus followed a series of wickets which eventually helped the India C being restricted to 232/9 as India B won the tournament by 51 runs.