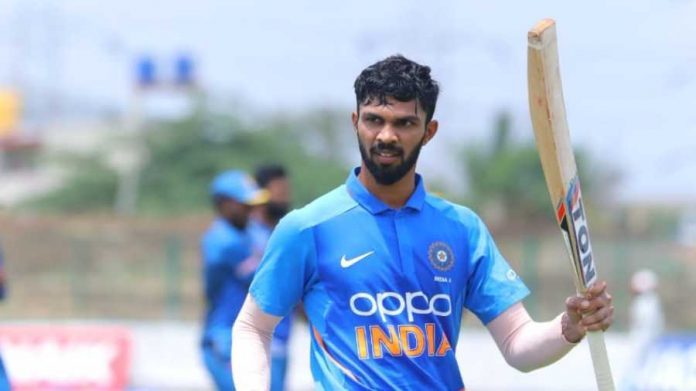 India ‘B’ registered a solid 108-run win over India ‘A’ in the opening match of the 2019 Deodhar Trophy at the JSCA Stadium in Ranchi on Thursday. Both Ruturaj Gaikwad and Baba Aparajith with their match winning centuries helped India ‘B’ record 302 for six after their side were asked to bat first. India ‘A’ in reply were bundled out for just 194 in 47.2 overs.

The opening game of this year’s Deodhar Trophy saw 22-year-old Maharashtra batsman, Gaikwad play a mature innings of 113 along with Aparajith (101) as the duo reached their sixth List ‘A’ hundreds today. Gaikwad, who was dropped on 86, finished with eight boundaries and four maximums, while Aparajith resumed his Vijay Hazare Trophy form, playing some wonderful shots on the way. The duo shared a partnership of 158 runs, which spanned for 37 overs, as the India ‘A’ bowlers failed to make an impact.

That's that from Ranchi as India B win by 108 runs against India A. pic.twitter.com/kNEvjED4Kr

Meanwhile, it was the India ‘B’ bowlers who came out on top in the second innings with constant pressure on the opposition. Left-arm pacer Roosh Kalaria picked up three wickets while Mohammed Siraj though his variations claimed two wickets in the first five overs of his spell.

Skipper Hanuma Vihari’s 59 from 82 wasn’t enough as India ‘A’ lost wickets at regular intervals before finally finishing their innings, 109-runs short of the target.