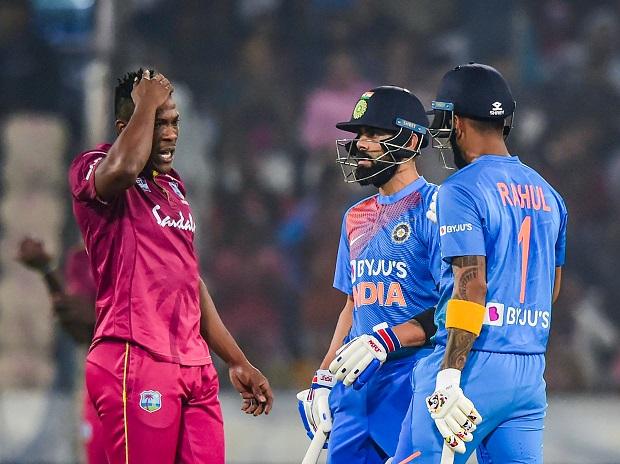 India’s top order rose to the occasion after taking advantage of the dew conditions which prevailed at the Barabati Stadium in Cuttack. Fifties from each of the Indian top-order batsmen set the tone for the chase which was finished off by bright cameos by Ravindra Jadeja and Shardul Thakur. With this win, India continued their dominance over the Windies in the subcontinent.

Indian skipper Virat Kohli elected to bowl considering the inevitable dew at the venue. The team also handed Navdeep Saini his ODI debut in place of the injured Deepak Chahar.

The Indian bowling attack kept the visitors under check in the first powerplay by keeping the run rate under check. Ravindra Jadeja drew first blood while Shami made his first entry into the wickets column soon after.

Navdeep Saini’s moment was not far away as he breached the third wicket partnership and proceeded with a yorker of his own to dismiss the well-set batsmen.

The turning period in the innings was arguably the death overs where the pair of Nicholas Pooran and Kieron Pollard added 120 runs in the final 10 overs which included 61 off the last 4 to set India a target of 316 to win the series.

The hosts started the run chase on an ideal note as Rohit Sharma and KL Rahul brought up their second consecutive hundred run stand. Sharma was the first to depart with 63 to his name while KL Rahul returned back to the pavilion after scoring 77.

Virat Kohli was the lone man standing as the middle order members, Shreyas Iyer and Rishabh Pant only managed single-digit scores. The skipper found an able ally in Ravindra Jadeja and converted his start into a fifty.

While it seemed like the chase master would navigate the side to yet another successful chase unbeaten, Keemo Paul had other plans as he got the prized wicket with 3 more overs left.

Unprecedented Growth: Dale Steyn ranks the Indian pace attack as the best in test cricket at the moment