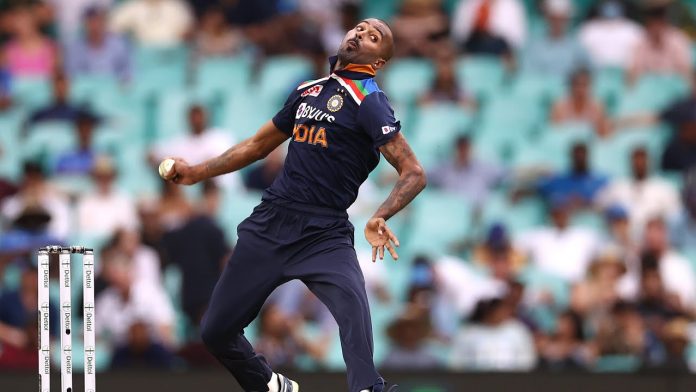 India’s contingent in Sri Lanka will have an additional bowling option for the limited-overs series in the form of Hardik Pandya. The all-rounder has not bowled on a regular basis since the 2019 Asia Cup and is now reported to be fit enough to do venture back into bowling.

Hardik Pandya arguably lost his place in the Test squad due to his absence from bowling. He did not bowl for Mumbai Indians as well during their IPL triumph last year and played as a pure batsman for India as well in limited-overs cricket.

Persistent niggles were said to be the reason behind Pandya not bowling for the team. While Mumbai Indians coaching staff Mahela Jayawardene and Zaheer Khan claimed that he is nearing full fitness, he did not bowl in the seven games Mumbai Indians played in the 14th edition of the tournament.

The team management in Sri Lanka, who are tracking the developments of the player claim that he will return back to bowling in this tour. The player has been apparently practicing in the nets and is not experiencing any discomfort at all.

“He is looking very fit and ready to bowl. He is bowling in the nets quite regularly & raring to go’ source close to the team management stated

Suryakumar Yadav had initially hinted that Pandya will bowl in the series. The right-arm pacer was also seen bowling in the intra-squad practice games as well.

‘Hardik Pandya is bowling and it is a very good sign.’ Suryakumar Yadav had said of his Mumbai Indians teammate.

Pandya appeared to bowl in the home series against England with a tweaked action, despite not on a consistent basis like before. He bowled in only one of the ODIs, but managed to get some overs under his belt in the T20 series.

His time away from the ball has improved his batting nonetheless. He had a prolific series in Australia with the bat across both formats.

The 27-year-old, however, struggled in the IPL with the defending champions playing a fair share of their matches in Chennai. The slow nature of the wicket is hard for an explosive batsman to come into and get rhythm straight away.

He seems to be in the groove now after smashing 79 runs in the recently concluded intra-squad simulation game.